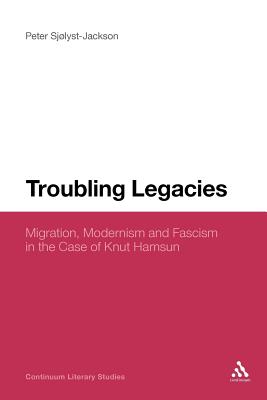 By Peter Sj Lyst-Jackson, Peter Sjolyst-Jackson
This item is not available.

Modernist troublemaker in the 1890s, Nobel Prize winner in 1920, and indefensible Nazi sympathiser in the 1930s and 40s, Knut Hamsun continues to provoke condemnation, apologia and critical confusion. Informed by the works of Jacques Derrida and Sigmund Freud, Troubling Legacies analyses the heterogeneous and conflicted legacies of the enigmatic European writer, Hamsun. Moving through different phases of his life, this study emphasises the dislocated nature of Hamsun's works and the diverse and conflicting responses his fiction elicited from such figures as Franz Kafka, Katherine Mansfield, Walter Benjamin and Martin Heidegger. Close readings of the major novels Hunger, Mysteries, Pan and Growth of the Soil are presented alongside lesser known writings, including his early polemic on America, his turn-of-the-century travelogue through Russia, his fascist polemics of the 1930s and 40s, and his controversial post-war testimony, On Overgrown Paths. Troubling Legacies links past debates with contemporary literary theory and deconstruction in a way that contributes to critical thinking about political responsibility.