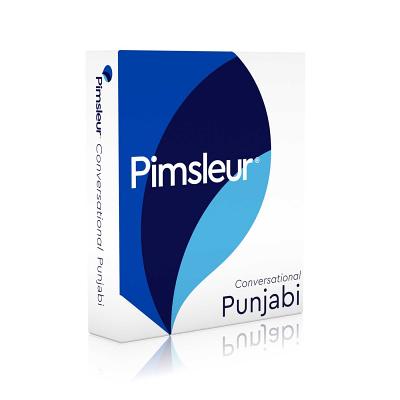 Pimsleur® equals success. Just one 30-minute lesson a day gets you speaking and understanding like no other program.

This course includes Lessons 1-16 from the Punjabi Level 1 Program - 8 hours of audio-only effective language learning with real-life spoken practice sessions. Each lesson provides 30 minutes of spoken language practice, with an introductory conversation, and new vocabulary and structures. Detailed instructions enable you to understand and participate in the conversation. Practice for vocabulary introduced in previous lessons is included in each lesson. Topics include: greetings, numbers, meals, shopping, telling time, scheduling activities, and asking and giving directions. The emphasis is on pronunciation and comprehension, and on learning to speak Punjabi.

The Punjabi Language
Punjabi is an Indo-Aryan language of the Indo-European language family. It is unique for being the only tonal language in this family. There are ten Punjabi dialects which are mostly mutually intelligible. This course teaches the Eastern Punjabi dialect as spoken in India. Punjabi is spoken by approximately 110-112 million people world-wide. It is an official language in the Indian states of Punjab, Haryana and Himachal Pradesh, and is also spoken elsewhere in northwestern India. Although not considered an official language in Pakistan, it is spoken by the majority in the Pakistani province of Punjab. It is also spoken by expatriate communities in Bangladesh, Canada, Fiji, Kenya, Libya, Malaysia (Peninsular), Mauritius, Singapore, United Arab Emirates, United Kingdom, and the United States. In Canada, Punjabi is thought to be the sixth most frequently spoken language. Punjabi is most commonly written using the Gurmukhi script.

Tech Talk
- CDs are formatted for playing in all CD players, including car players, and users can copy files for use in iTunes or Windows Media Player.

Dr. Paul Pimsleur devoted his life to language teaching and testing and was one of the world’s leading experts in applied linguistics. After years of experience and research, Dr. Pimsleur developed The Pimsleur Method based on two key principles:  the Principle of Anticipation and a scientific principle of memory training that he called “Graduated Interval Recall.”  This Method has been applied to the many levels and languages of the Pimsleur Programs.