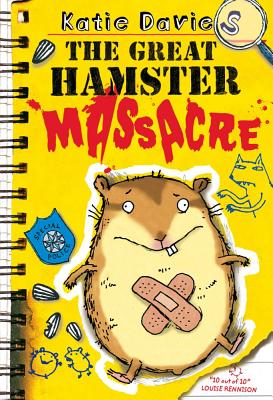 On one hand, The Great Hamster Massacre is a funny, quirky, and unique children's mystery, about a girl's naïve attempts to figure out what "really" happened to her pets; at the same time, the adult subtext and humor, which should (hopefully) pass way over most kids' heads, will keep grown up bedtime story readers awake--and laughing--well after the kids are asleep. CAUTION: The title is not a euphemism, nor is it figurative; it does not refer to a dream, an exaggeration, or any other "imaginary" point-of-view that American children's books use to step around dealing with death. With gut-busting British humor, Katie Davies bluntly confronts some of the grimmer realities of having pets, and certain gruesome aspects of animal behavior that may be difficult for young humans to understand. Not for coddled or overly sensitive children!

Anna and her brother, Tom, have always wanted a pet. And after their latest pestering campaign, their mother finally gives in and lets them choose a pair of hamsters from the local pet shop. But their happiness soon turns to horror when the hamsters are found mysteriously dead in their cage. Anna and Tom launch a full-scale investigation to determine who—or what—is behind the hamster homicides. Can they solve the case of the Great Hamster Massacre?

Katie Davies knows a thing or two about animal disasters. She is the author of The Great Dog Disaster, The Great Cat Conspiracy, The Great Rabbit Rescue, and her first book, The Great Hamster Massacre, which was inspired by true events—when she was twelve years old, after a relentless begging campaign, she was given two Russian Dwarf hamsters for Christmas. She has yet to recover from what happened to those hamsters. Katie lives with her family in North London. Visit her at KatieDaviesBooks.com.

Hannah Shaw was born into a large family of sprout-munching vegetarians. She lives in a little cottage in the Cotswolds with her husband, Ben the blacksmith, and her rescue dog, Ren. She finds that her overactive imagination fuels new ideas, but unfortunately it keeps her awake at night!

"A flippy, fun and extremely fast-paced journey into the world of a very likable brother and sister--and their amusing family and friends. Intermittent silly pencil sketches fill the pages diary-style, creating a whimsical mood and adding comic relief.... Giggles are frequent among the kids in this book, and they will infect readers as well."
--BookPage, May 2011

"This British import is an interesting mix of British humor with serious issues interspersed.
Whimsical, cartoonish pen-and-ink illustrations accompany the story and help lighten the seriousness....This is the first in a series that will appeal to fans of Roald Dahl and Dick King-Smith."

"For young readers who can handle a bit of the macabre with their giggles, this strange little tale will be perfectly appealing."

--Bulletin of the Center for Children's Books, July/August 2011

"An interesting take on how children deal with grief and shock.... Anna’s voice is engaging, and portrayals of various pets and neighbors (with accompanying hand-drawn side notes and cartoons) will entertain...give this dark comedy to reluctant readers, mystery lovers, and fans of narrator-illustrated fare like Jeff Kinney’s “Diary of a Wimpy Kid” books or Tom Angleberger’s The Strange Case of Origami Yoda (2010, both Abrams)."