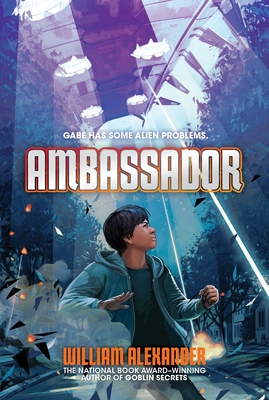 Gabe Fuentes is in for the ride of his life when he becomes Earth’s ambassador to the galaxy in this alien sci-fi adventure from the National Book Award–winning author of Goblin Secrets.

Gabe Fuentes is reading under the covers one summer night when he is interrupted by a creature who looks like a purple sock puppet. The sock puppet introduces himself as the Envoy and asks if Gabe wants to be Earth’s ambassador to the galaxy. What sane eleven-year-old could refuse?

Some ingenious tinkering with the washing machine sends Gabe’s “entangled” self out to the center of the galaxy. There he finds that Earth is in the path of a destructive alien force—and Gabe himself is the target of an assassination plot. Exactly who wants him out of the way? And why?

Back home, Gabe discovers that his undocumented immigrant parents are in danger of being deported. Can Gabe survive long enough to solve two sets of “alien” problems? He runs for his life, through Minneapolis and outer space, in this fast-paced adventure from a National Book Award–winning author.

“Physics lovers will enjoy this clever series opener—but so will those who enjoy comedy, politics, diplomacy or strange-looking aliens” (Kirkus Reviews, starred review).

William Alexander won the National Book Award for his debut novel, Goblin Secrets, and won the Earphones Award for his narration of the audiobook. His other novels include A Festival of Ghosts, A Properly Unhaunted Place, Ghoulish Song, Nomad, and Ambassador. William studied theater and folklore at Oberlin College, English at the University of Vermont, and creative writing at the Clarion workshop. He teaches in the Vermont College of Fine Arts MFA program in Writing for Children and Young Adults. Like the protagonist of Nomad and Ambassador, William is the son of a Latino immigrant to the US. Visit him online at WillAlex.net and GoblinSecrets.com, and on Twitter via @WillieAlex.

Alexander creates in Gabe a character who remains tremendously likable while exhibiting courage, diplomacy, and invention in trying to take care of his family, himself, and his planet all at once. It’s a meaty and entertaining novel with an open-ended conclusion offering lots of room for discussion.
— Horn Book

In the short time William Alexander has had books out, I have become a huge fan of his writing. He has done it again—Gabe Fuentes is imaginative, sweet, and courageous in all the right ways without being a bit saccharine or off-putting, and is most likely going to save planet earth from destruction. I can’t wait for book number 2!
— Jane Yolen, author of The Devil's Arithmetic

"An engaging and smart allegory about the hurt and strangeness of the modern immigrant condition."
— Hector Tobar

"This is an excellent book."
— Library Media Connection