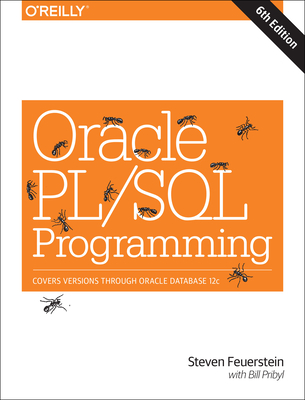 Considered the best Oracle PL/SQL programming guide by the Oracle community, this definitive guide is precisely what you need to make the most of Oracle's powerful procedural language. The sixth edition describes the features and capabilities of PL/SQL up through Oracle Database 12c Release 1.

Hundreds of thousands of PL/SQL developers have benefited from this book over the last twenty years; this edition continues that tradition. With extensive code examples and a lively sense of humor, this book explains language fundamentals, explores advanced coding techniques, and offers best practices to help you solve real-world problems.

Steven Feuerstein is considered to be one of the world's leading experts on the Oracle PL/SQL language, having written ten books on PL/SQL, including Oracle PL/SQL Programming and Oracle PL/SQL Best Practices (all published by O'Reilly Media). He has also published his first book for kids: http: //stevenfeuerstein.com/vivianvultur​e. Steven has been developing software since 1980, spent five years with Oracle (1987-1992), and served as PL/SQL Evangelist for Quest Software (and then Dell) from January 2001 to February 2014. He is an Oracle ACE Director and writes regularly for Oracle Magazine, which named him the PL/SQL Developer of the Year in both 2002 and 2006. He is also the first recipient of ODTUG's Lifetime Achievement Award (2009). Steven's latest initiative is the PL/SQL Challenge (http: //www.plsqlchallenge.com), a daily quiz for PL/SQL developers; hundreds of programmers play each day. Check it out and join the fun! Steven's online technical cyberhome is located at www.ToadWorld.com/SF. You can also catch up on his latest, mostly non-PLSQL rants at http: //feuerthoughts.blogspot.com.Bill Pribyl is the primary author of Learning Oracle PL/SQL and the coauthor of Oracle PL/SQL Programming and its companion pocket reference, all from O'Reilly Media. He is oddly proud of having used PL/SQL to write TCP/IP networking clients, tnsping callouts, near-realtime commodity price loaders, and transcendental functions. Bill, who holds a degree in physics from Rice University, is the former editor of the IOUG technical journal (Select) and former president of the South Central Oracle Users Group. At home with his family in Houston, Texas, Bill's current nonbillable titles include Webmaster for his neighborhood civic club, IT Guy for his son's Boy Scout troop, and Eucharistic Adoration Coordinator for his church. Visit Bill's firm at http: //www.datacraft.com.