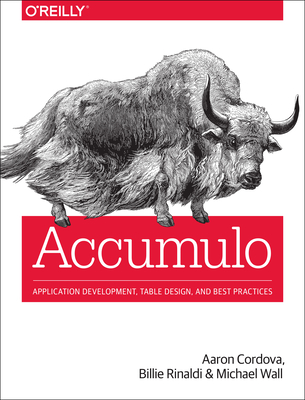 With clear information on system administration, performance tuning, and best practices, this book is ideal for developers seeking to write Accumulo applications, administrators charged with installing and maintaining Accumulo, and other professionals interested in what Accumulo has to offer. You will find everything you need to use this system fully.

Aaron Cordova worked as a computer systems researcher at the National Security Agency where he started and led the Apache Accumulo project through its first release. He has built large scale data processing and analysis systems for intelligence, defense, academic research, and web companies. Aaron is a cofounder of Koverse Inc.From 2008 to 2012, Billie Rinaldi was a leader of the National Security Agency computer science research team that implemented Apache Accumulo. Dr. Rinaldi codesigned one of Accumulo's key technical advantages, a customizable server-side programming framework, and made numerous other contributions to the software. Since Accumulo became open source in fall 2011, she has worked to foster the community surrounding it. Dr. Rinaldi was elected the Project Management Committee Chair when Accumulo became a top-level Apache project and was subsequently invited to become a member of the Apache Software Foundation. Dr. Rinaldi is a Senior Member of Technical Staff at Hortonworks, Inc.Michael Wall has been using Apache Accumulo since September 2010 and has been involved in all types of development from analytic simulation to a large scale news aggregation site. After graduating from the US Air Force Academy in 1994, he served on active duty in the US Air Force. Since leaving the military, Mike has worked as a software engineer for the National Security Agency and other government agencies.