Bird of Paradise: How I Became Latina (Paperback) 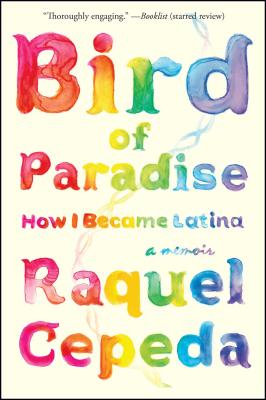 In 2009, Raquel Cepeda embarked on an exploration of her genealogy using ancestral DNA testing to uncover the truth about her family and the tapestry of races and ethnicities that came together in an ambiguous mix in her features, resulting in “a beautiful story of reconciliation and redemption” (Huffington Post) with her identity and what it means to be Latina.

Digging through memories long buried, Cepeda journeyed not only into her ancestry but also into her own history. Born in Harlem to Dominican parents, she was sent to live with her maternal grandparents in the Paraíso (Paradise) district in Santo Domingo while still a baby. It proved to be an idyllic reprieve in her otherwise fraught childhood. Paraíso came to mean family, home, belonging. When Cepeda returned to the US, she discovered her family constellation had changed. Her mother had a new, abusive boyfriend, who relocated the family to San Francisco. When that relationship fell apart, Cepeda found herself back in New York City with her father and European stepmother: attending tennis lessons and Catholic schools; fighting vicious battles with her father, who discouraged her from expressing the Dominican part of her hyphenated identity; and immersed in the ’80s hip-hop culture of uptown Manhattan. It was in these streets, through the prism of hip-hop and the sometimes loving embrace of her community, that Cepeda constructed her own identity.

Years later, when Cepeda had become a successful journalist and documentary filmmaker, the strands of her DNA would take her further, across the globe and into history. Who were her ancestors? How did they—and she—become Latina? Her journey, as the most unforgettable ones often do, would lead her to places she hadn’t expected to go. With a vibrant lyrical prose and fierce honesty, Cepeda parses concepts of race, identity, and ancestral DNA among Latinos by using her own Dominican-American story as one example, and in the process arrives at some sort of peace with her father.

Raquel Cepeda is an award-winning journalist, cultural activist, and documentary filmmaker. A former magazine editor, her byline has appeared in The Village Voice, CNN.com, the Associated Press, and many others. Cepeda directed and produced Bling: A Planet Rock, the critically acclaimed documentary about American hip-hop culture’s obsession with diamonds. She lives with her husband, a writer and TV producer, daughter, and son in her beloved New York City.

“I applaud Raquel Cepeda’s courage and brilliance. This is an important book, shedding light on questions that many of us ask ourselves, but seldom speak about out loud.”
— Marcus Samuelsson, chef and author of New York Times best-seller Yes, Chef

“A thrilling and impassioned quest into the heart of the race question and the Latino—a label as we've come to understand it. With meticulous research and refreshing honesty, Cepeda breaks the code not only of her own origins, but those of an entire people. Bird of Paradise is a necessary and important book for our time.”
— Patricia Engel

"In Bird of Paradise, Raquel Cepeda takes on, with cultural flair and brutal honesty, what it means to be the living embodiment of a global society. A Dominican-American woman seeking the truth about her roots, Cepeda uses tools including DNA testing and her reporterly skill for teasing out family secrets. What she finds is a revelation not just for her or for Latino Americans, but for anyone who cares about the way the past connects us to the future."
— Farai Chideya

"Raquel Cepeda has long been one of the hip-hop community's most passionate and visionary writers and filmmakers; now, with this stunning blend of memoir and reportage, mythos and logos, we will have to share her with the world. An elegant, electric mash-up, Bird of Paradise offers resonant snapshots of a bygone New York City, family portraits saturated with beauty, honesty, and pain, captivating travelogues, and a fascinating, wide-angled look at ethnicity and identity. Cepeda's story is wrought with care and insight – and ought to increase the sale of DNA testing kits by about twelve thousand percent."
— Adam Mansbach

“A beautiful story of reconciliation and redemption.”
— The Huffington Post

"I hope that Raquel Cepeda's experience searching for her roots will encourage more Latinos to look at themselves with the same honesty and fierceness."
— Esmeralda Santiago

"At a time when Latinas of any age struggle with owning our voice and our identity and dealing with the mixed messages they get from this country—'We love you, we hate you! Stay! Go!'—Raquel Cepeda opens her heart and shows us all a new and real path towards the futuro, the future. I believe this book is transformational and will not only change lives, but save them too."
— Maria Hinojosa, NPR and PBS anchor, and executive producer of Latino USA

“Drawing on the science of DNA testing and her own sense and experience of mysticism, Cepeda, an award-winning journalist and documentary filmmaker, offers a ‘synthesis between logos and mythos’ in a thoroughly engaging look at race from a Latina’s perspective on what is touted as a post racial society.”
— Booklist, starred review

“Cepeda’s complex family history is both uniquely Latino—the book is peppered with Spanish idiom—and paradoxically universal in this nation of immigrants. It will appeal to those who watch Who Do You Think You Are? and wonder about themselves.”
— Library Journal