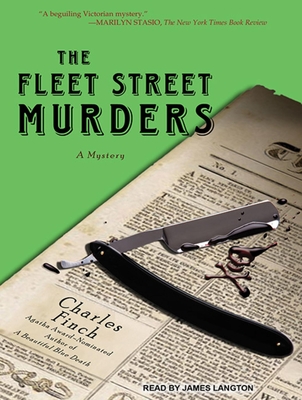 By Charles Finch, James Langton (Narrated by)
This item is not available.
Out of Print

This is book number 3 in the Charles Lenox Mysteries series.

It's Christmas, 1866, and amateur sleuth Charles Lenox, recently engaged to his best friend, Lady Jane Grey, is happily celebrating the holiday in his Mayfair townhouse. Across London, however, two journalists have just met with violent deaths--one shot, one throttled. Lenox soon involves himself in the strange case but must leave it behind to go north to Stirrington, where he is running for Parliament. Once there, he gets a further shock when Lady Jane sends him a letter whose contents may threaten their nuptials. In London, the police apprehend two unlikely and unrelated murder suspects. From the start, Lenox has his doubts; the crimes, he is sure, are tied. But how? Racing back and forth between London and Stirrington, Lenox must negotiate the complexities of crime and politics, not to mention his imperiled engagement. But as the case mounts, Lenox learns that the person behind the murders may be closer to him--and his beloved--than he knows.

Actor and musician James Langton, an "AudioFile" Earphones Award winner, has performed many voice-overs and narrated numerous audiobooks, including the international bestseller "The Brotherhood of the Holy Shroud" by Julia Navarro and "The Demon's Lexicon" by Sarah Rees Brennan.

"With its vivid evocation of Victorian England and an appealing protagonist, this is a worthy addition to a fine series of historical whodunits." ---Booklist