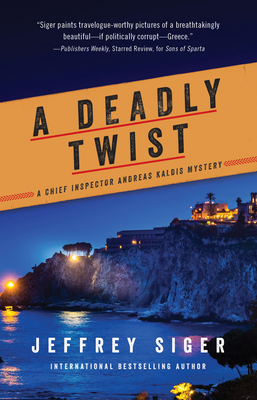 This is book number 11 in the Chief Inspector Andreas Kaldis Mysteries series.

Some crimes can never be forgiven--or atoned for

When Athens journalist Nikoletta Elia disappears while on assignment on the island of Naxos, her editor calls on Chief Inspector Andreas Kaldis to investigate. Sent to report on the conflict between preservationists and advocates for expanded tourism, Nikoletta is approached by a fan who takes credit for several suspicious deaths she'd reported on in the past. The assassin claims to have abandoned that life, and convinces the reporter to write about him and his murderous exploits for hire.

Kaldis sends his deputy, Yianni, to look into her disappearance when an unidentified body is found at the base of a cliff. Who is the mysterious corpse, and where is Nikoletta? Leads turn into more dead bodies in this twisting tale of greed, corruption, and murder that puts Kaldis, his family, and members of his team in the path of a ruthless killer who will stop at nothing to keep dark secrets buried--forever.