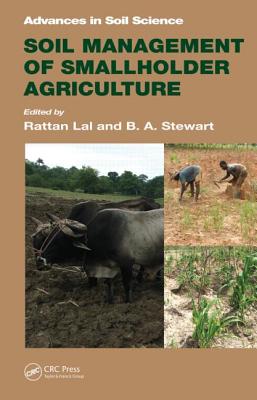 This is book number 21 in the Advances in Soil Science series.

Nearly two billion people depend on hundreds of millions of smallholder farmers for food security. Yet, these farmers' lives also hang in the balance due to their extreme vulnerability to the risks of soil degradation and depletion, soil exhaustion, climate change, and numerous biotic and abiotic stresses. Soil Management of Smallholder Agriculture explores the potential smallholder agriculture hold for advancing global food security and outlines the challenges to achieving this goal.

Edited by experts, the book makes the case for the adoption of proven technologies of sustainable intensification, producing more from less, both for advancing agronomic production and adapting to changing climate. It outlines a strategy that will usher in a soil-based Green Revolution by increasing the use efficiency of energy-based inputs such as fertilizers, pesticides, and irrigation to restore soil quality, and sequestering carbon in the terrestrial ecosystems. This strategy helps small farms narrow the gap between the actual and attainable crop yield.

Rattan Lal, Ph.D., is a Distinguished University Professor of Soil Science and Director of the Carbon Management and Sequestration Center, The Ohio State University, and an Adjucnct Professor of University of Iceland. With completion of education from Punjab Agricultural University, Ludhiana (B.Sc, 1963), Indian Agricultural Research Institute, New Delhi (M.Sc, 1965), and the Ohio State University, Columbus( Ph.D,1968), he served as Sr. Research Fellow with the University of Sydney, Australia (1968-69), Soil Physicist at IITA, Ibadan, Nigeria (1969-87), and Professor of Soil Science at OSU (1987-to date).His current research focus is on climate-resilient agriculture, soil carbon sequestration, sustainable intensification, enhancing use efficiency of agroecosystems, and sustainable management of soil resources of the tropics. He is a fellow of the American Society of Agronomy (ASA), Soil Science Society of America (SSSA), Third World Academy of Sciences, American Association for the Advancement of Sciences, Soil and Water Conservation Society (SWCS), Indian Academy of Agricultural Sciences, and Rothamsted (U.K.). He received the Hugh Hammond Bennett Award of the SWCS, 2005 Borlaug Award, and Liebig Award (2006) of the International Union of Soil Science, M.S. Swaminathan Award (India) of 2009, and COMLAND Award (Germany) of 2009. He received honorary degree of Doctor of Science from Punjab Agricultural University (2001), the Norwegian University of Life Sciences, Aas(2005), and Alecu Russo Balti State University, Moldova (2010). He was president of the World Association of the Soil and Water Conservation (1987-1990), the International Soil Tillage Research Organization (1988-91), and the SSSA (2005-2007). He was a member of the Federal Advisory Committee on National Assessment of Climate Change-NCADAC (2010-2013), member of the SERDP Scientific Advisory Board of the DOE (2011-), Senior Science Advisor to the Global Soil Forum of IASS, Potsdam, Germany (2010-), member of the Advisory Board of FACCE-JPI of the European Council (2013-) and member of the Advisory Board, UNU-FLORES, Dresden, Germany (2014-2017). Prof. Lal was a lead author of IPCC (1998-2000), and was awarded Nobel Peace Prize Certificate by IPCC in 2007, and Global Dry land Champion of UNCCD and Rothamsted Fellow in 2013. He has mentored 101 graduate students and 54 postdoctoral researchers, and hosted 120 visiting scholars. He has authored /co-authored more than 1700 research publications including 678 refereed journal articles, has written 12 and edited / co-edited 56 books.B.A. Stewart is a distinguished professor of soil science at the West Texas A&M University, Canyon, Texas. He is also the director of the Dryland Agriculture Institute, and a former director of the USDA Conservation and Production Laboratory at Bushland, Texas; past president of the Soil Science Society of America; and member of the 1990-1993 Committee on Long-Range Soil and Water Policy, National Research Council, National Academy of Sciences. He is a fellow on the Soil Science Society of America, American Society o Agronomy, Soil and Water Conservation Society, a recipient of the USDA Superior Service Award, a recipient of the Hugh Hammond Bennett Award of the Soil and Water Conservation Society, and an honorary member of the International Union of Soil Sciences in 2008. Dr. Stewart is very supportive of education and research on dryland agriculture. The B.A. and Jane Anne Stewart Dryland Agriculture Scholarship Fund was established in West Texas A&M University in 1994 to provide scholarships for undergraduate and graduate students with a demonstrated interest in dryland agriculture