Mad or Bad: Crime and Insanity in Victorian Britain (Paperback) 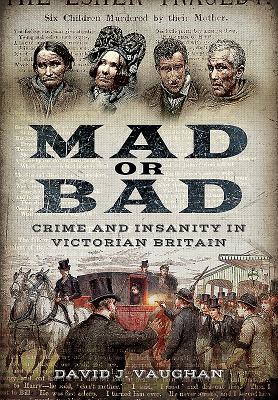 By David J. Vaughan
This item is not available.
Out of Print

In a violent 19th century, desperate attempts by the alienists - a new wave of 'mad-doctor' - brought the insanity plea into Victorian courts. Defining psychological conditions in an attempt at acquittal, they faced ridicule, obstruction - even professional ruin - as they strove for acceptance and struggled for change. It left 'mad people' hanged for offenses they could not remember, and 'bad' people freed on unscrupulous pleas. Written in accessible language, this book - unlike any before it - retells twenty-five cases, from the renowned to obscure, including an attempt to murder a bemused Queen Victoria; the poisoner Dove and the much-feared magician; the king's former wet-nurse who slaughtered six children; the worst serial killer in Britain...and more. A Who's Who introduces the principal players - lifesaving medics, like Maudsley and Bucknill; intransigent lawyers like Bramwell and Parke., while a convenient Glossary of 'terms and conditions' ranging from 'Insane on Arraignment' to Her Majesty's Pleasure, 'Ticket of Leave' to 'Burden of Proof', helps to explain the outcomes of the cases. Insanity Conditions presents, in glossary format, the diagnosed maladies put forward in court. Rarely accepted, more often rejected, by those keen on justice in its traditional form. A History of Debate explains the titular subject - through graspable language and a window in time. How the ones found 'not guilty on the grounds of insanity' were curiously handled in Victorian law. A chapter devoted to madness and women - from hysteria to murder, 'monthly madness' to crime. Raising opportune questions about the issue of gender, and exposing the truths of a masculine world.