From Radio to Television: Programs That Made the Transition, 1929-2021 (Paperback) 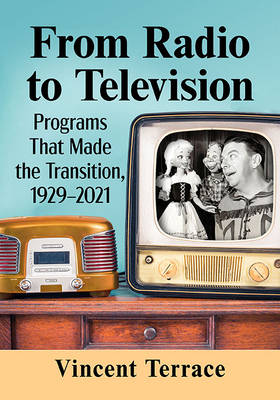 By Vincent Terrace
This item is not available.

The early years of television relied in part on successful narratives of another medium, as studios adapted radio programs like Boston Blackie and Defense Attorney to the small screen. Many shows were adapted more than once, like the radio program Blondie, which inspired six television adaptations and 28 theatrical films. These are but a few of the 1,164 programs covered in this volume. Each program entry contains a detailed story line, years of broadcast, performer and character casts and principal production credits where possible. Two appendices (Almost a Transition and Television to Radio) and a performer's index conclude the book. This first-of-its-kind encyclopedia covers many little-known programs that have rarely been discussed in print (e.g., Real George, based on Me and Janie; Volume One, based on Quiet, Please; and Galaxy, based on X Minus One). Covered programs include The Great Gildersleeve, Howdy Doody, My Friend Irma, My Little Margie, Space Patrol and Vic and Sade.

Vincent Terrace has been a researcher for ABC television and is the television historian for BPOLIN Productions (an independent film and television producing company for which he has created two projected televisions series: April's Dream and April and May: Ghost Hunters (both starring actress-ventriloquist April Brucker). He has written more than 50 books about television and radio.