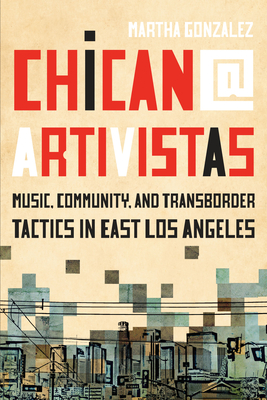 As the lead singer of the Grammy Award–winning rock band Quetzal and a scholar of Chicana/o and Latina/o studies, Martha Gonzalez is uniquely positioned to articulate the ways in which creative expression can serve the dual roles of political commentary and community building. Drawing on postcolonial, Chicana, black feminist, and performance theories, Chican@ Artivistas explores the visual, musical, and performance art produced in East Los Angeles since the inception of NAFTA and the subsequent anti-immigration rhetoric of the 1990s.

Showcasing the social impact made by key artist-activists on their communities and on the mainstream art world and music industry, Gonzalez charts the evolution of a now-canonical body of work that took its inspiration from the Zapatista movement, particularly its masked indigenous participants, and that responded to efforts to impose systems of labor exploitation and social subjugation. Incorporating Gonzalez’s memories of the Mexican nationalist music of her childhood and her band’s journey to Chiapas, the book captures the mobilizing music, poetry, dance, and art that emerged in pre-gentrification corners of downtown Los Angeles and that went on to inspire flourishing networks of bold, innovative artivistas.

Martha Gonzalez is an associate professor in the Intercollegiate Department of Chicana/o Latina/o studies at Scripps/Claremont College, lead singer of the Grammy Award–winning rock band Quetzal, and contributor to Dancing Across Borders and Performing Motherhood.

Moving from her upbringing with her musician father to the Zapatista movement to the rise of Quetzal, Gonzalez shows how music is 'a conduit of freedom and a malleable tool for those who envision social change.' Moreover, she demonstrates how art practices can be used 'to go beyond resistance, into actively building on the dream and tangible enactments of new worlds.'
— L.A. Taco, "The 2020 L.A. Taco Book Guide"

Beyond documenting an important historical period of Chicana/o music-making, the book makes other contributions of note...The book is also unique in its presentation of music culture not centered on genre or style but rather on the sociopolitical context from which the practices that Gonzalez documents and theorizes emerge...Chican@ Artivistas is a valuable text for students and scholars of Chicanx/Latinx music and culture.
— Chiricú Journal

This compact, powerful book could only have been written by Martha Gonzalez...[Chican@ Artivistas] book stands out in various ways. The text is carefully crafted with a scriptural economy few academics achieve, while not sacrificing rigor and complexity. Gonzalez is strategic in prose and presentation, disruptive of received narratives, and transgressive of disciplinary boundaries. Furthermore, she uncovers a remarkable assortment of concepts and questions for further development by scholars in various disciplines and fields...This work will be widely read in Chicanx/Latinx studies, feminist studies, and music theory circles. It is of particular interest to students of recent music history, Zapatista studies scholars, and those researching neoliberalism and active resistance to it into the twenty-first century.
— H-Socialisms