Grandmothers on Guard: Gender, Aging, and the Minutemen at the US-Mexico Border (Hardcover) 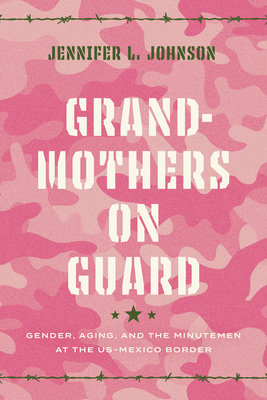 For about a decade, one of the most influential forces in US anti-immigrant politics was the Minuteman Project. The armed volunteers made headlines patrolling the southern border. What drove their ethno-nationalist politics?

Jennifer L. Johnson spent hundreds of hours observing and interviewing Minutemen, hoping to answer that question. She reached surprising conclusions. While the public face of border politics is hypermasculine—men in uniforms, fatigues, and suits—older women were central to the Minutemen. Women mobilized support and took part in border missions. These women compel us to look beyond ideological commitments and material benefits in seeking to understand the appeal of right-wing politics. Johnson argues that the women of the Minutemen were motivated in part by the gendered experience of aging in America. In a society that makes old women irrelevant, aging white women found their place through anti-immigrant activism, which wedded native politics to their concern for the safety of their families. Grandmothers on Guard emphasizes another side of nationalism: the yearning for inclusion. The nation the Minutemen imagined was not only a space of exclusion but also one in which these women could belong.

Jennifer L. Johnson is the R. Todd Ruppert Professor of International Studies and a professor of sociology at Kenyon College. She is an affiliate of the Center for Right-Wing Studies at the University of California, Berkeley.

There's...plenty of interesting material to latch onto and grapple with [in Grandmothers on Guard]...In a culture where aging women often feel invisible and undervalued, Johnson’s research explores how the women she interviewed found both a like-minded community and a renewed sense of purpose in life...For journalists, scholars, researchers attempting to study hate groups the Appendix to Johnson’s book presents invaluable insights — what to do, what not to do. When crossing the invisible line between those who share our beliefs and those who do not, the stakes could not be higher.
— Sightlines

A scholarly book that reads like watching a fast-paced documentary...Johnson brings a wealth of knowledge of border politics and context to this fascinating book.
— BuzzFeed News

Johnson...opens with the revelation that, despite being branded by others and themselves as 'male' and 'hypermasculine,' the virulently anti-immigrant Minutemen Project has incorporated women since its inception...Based on in-depth ethnographic work during the 2010s with 17 such women, most of them grandmothers, the author explores their nativist public activism along with their private life experiences...For many Americans, these grandmothers' performance of 'old womanhood' in the context of militant nativism and white supremacy may be offensive, but it leads Johnson, as a scholar and feminist, to seek understanding, if not empathy, for older women who desperately struggle with becoming irrelevant and invisible in a fast-changing society they cannot accept...Recommended.
— CHOICE