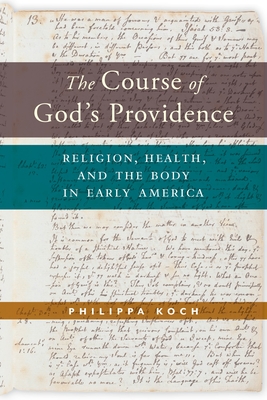 The COVID-19 pandemic has demonstrated the power of narrative during times of sickness and disease. As Americans strive to find meaning amid upheaval and loss, some consider the nature of God's will. Early American Protestants experienced similar struggles as they attempted to interpret the diseases of their time. In this groundbreaking work, Philippa Koch explores the doctrine of providence--a belief in a divine plan for the world--and its manifestations in eighteenth-century America, from its origins as a consoling response to sickness to how it informed the practices of Protestant activity in the Atlantic world. Drawing on pastoral manuals, manuscript memoirs, journals, and letters, as well as medical treatises, epidemic narratives, and midwifery manuals, Koch shows how Protestant teachings around providence shaped the lives of believers even as the Enlightenment seemed to portend a more secular approach to the world and the human body. Their commitment to providence prompted, in fact, early Americans' active engagement with the medical developments of their time, encouraging them to see modern science and medicine as divinely bestowed missionary tools for helping others. Indeed, the book shows that the ways in which the colonial world thought about questions of God's will in sickness and health help to illuminate the continuing power of Protestant ideas and practices in American society today.

Philippa Koch is Assistant Professor of Religious Studies at Missouri State University. Her research and teaching center on religion, health, and society in early America and its global context.