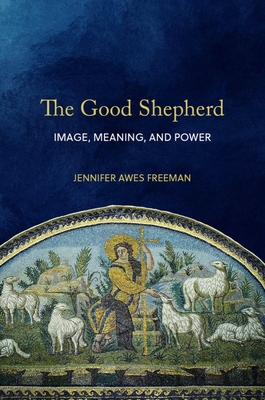 By Jennifer Awes Freeman
This item is not available.

A statuette of Egyptian King Pepi formidably wielding a shepherd's crook stands in stark contrast to a fresco of an unassuming Orpheus-like youth gently hoisting a sheep around his shoulders. Both images, however, occupy an extensive tradition of shepherding motifs. In the transition from ancient Near Eastern depictions of the keeper of flocks as one holding great power to the more pastoral scenes of early Christian art, it might appear that connotations of rulership were divested from the image of the shepherd. The reality, however, presents a much more complex tapestry.

The Good Shepherd: Image, Meaning, and Power traces the visual and textual depictions of the Good Shepherd motif from its early iterations as a potent symbol of kingship, through its reimagining in biblical figures, such as the shepherd-king David, and onward to the shepherds of Greco-Roman literature. Jennifer Awes Freeman reveals that the figure of the Good Shepherd never became humble or docile but always carried connotations of empire, divinity, and defensive violence even within varied sociopolitical contexts. The early Christian invocation of the Good Shepherd was not simply anti-imperial but relied on a complex set of associations that included king, priest, pastor, and sacrificial victim--even as it subverted those meanings in the figure of Jesus, both shepherd and sacrificial lamb. The concept of the Good Shepherd continued to prove useful for early medieval rulers, such as Charlemagne, but its imperial references waned in the later Middle Ages as it became more exclusively applied to church leaders.

Drawing on a range of sources including literature, theological treatises, and political texts, as well as sculpture, mosaics, and manuscript illuminations, The Good Shepherd offers a significant contribution as the first comprehensive study of the long history of the Good Shepherd motif. It also engages the flexible and multivalent abilities of visual and textual symbols to convey multiple meanings in religious and political contexts.

Jennifer Awes Freeman is Assistant Professor and Program Director of Theology and the Arts at United Theological Seminary of the Twin Cities.