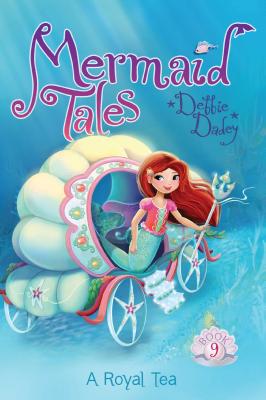 This is book number 9 in the Mermaid Tales series.

When Shelly meets the Queen of the Western Oceans in this Mermaid Tales adventure, she encounters a royal dilemma!

When a royal messenger announces that Queen Edwina is coming to tea, Shelly is as jittery as a jellyfish! After all, the Queen of the Western Oceans is her great aunt. And despite being a princess, Shelly has never met a queen before. How should she act? What should she wear?

Then Pearl tells Shelly that the queen is going to take Shelly to live in Neptune’s Castle: “It’s where a real princess would live,” Pearl tells her. Shelly is terrified of leaving her home, friends, and beloved grandfather behind. When the royal carriage arrives, she’s trembling from the top of her head to the tip of her tail. What will Queen Edwina think of Princess Shelly? And will she really take Shelly away from the home she loves?

Debbie Dadey is an award-winning children’s book author who has written more than 150 books. She is best known for her series The Adventures of the Bailey School Kids, written with Marcia Thornton Jones. Debbie lives with her husband, her children, and three dogs in Sevierville, Tennessee.

Tatevik Avakyan has illustrated many books for children, including the Mermaid Tales series.