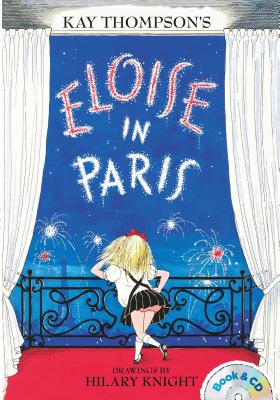 It’s Eloise’s sixtieth birthday—though she’s still not a day over six. Celebrate by joining Eloise on a Parisian adventure in this storybook that now comes with a CD narrated by the brilliant Bernadette Peters!

Eloise is a very special little girl who lives at The Plaza Hotel in New York City. Find out what happens when Eloise leaves The Plaza and says bonjour to Paris in this delightful tale. Fans young and old will love this classic Eloise adventure narrated by the talented Bernadette Peters!

Kay Thompson (1909–1998) was a singer, dancer, vocal arranger, and coach of many MGM musicals in the 1940s. The Eloise character grew out of the voice of a precocious six-year-old that Miss Thompson put on to amuse her friends. Collaborating with Hilary Knight on what was an immediate bestseller, Kay Thompson became a literary sensation when Eloise was published in 1955. The book has sold more than two million copies to date. Kay Thompson and Hilary Knight created four more Eloise books, Eloise in Paris, Eloise at Christmas, Eloise in Moscow, and Eloise Takes a Bawth.

Hilary Knight, son of artist-writers Clayton Knight and Katharine Sturges, was educated at the Art Students League, where he studied with Reginald Marsh. Besides the Eloise books, Hilary Knight has illustrated more than fifty books for children, six of which he wrote himself. He lives and works in New York City, not far from The Plaza Hotel.