Legacy of Light (The Effigies #3) (Paperback) 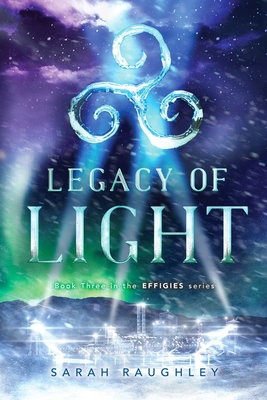 This is book number 3 in the The Effigies series.

The Effigies must uncover the connection between Saul, Blackwell, and the Phantoms before it’s too late in this epic conclusion to the Effigies trilogy.

The world is in chaos.

After Saul’s strike on Oslo—one seemingly led by Maia herself—the Effigies’ reputation is in shambles. Now they’re being hunted by nations across the globe, grouped in with the very terrorists they’ve been trying to stop.

With Maia’s resurrected twin, June, carrying out vicious attacks across the world, everyone believes Maia is a killer. Belle has gone rogue, Chae Rin and Lake have disappeared, and the Sect is being dismantled and replaced by a terrifying new world order helmed by Blackwell. As for Saul, his ultimate plan still remains a mystery.

And Maia? No one has seen or heard from her in weeks.

It’s all somehow connected—Saul, Phantoms, the Effigies, everything. But if the Effigies can’t put the pieces together soon, there may not be much left of the world they’ve fought so desperately to save.

Sarah Raughley grew up in Southern Ontario writing stories about freakish little girls with powers because she secretly wanted to be one. She is a huge fangirl of anything from manga to sci-fi fantasy TV to Japanese role-playing games and other geeky things, all of which have largely inspired her writing. Sarah has been nominated for the Aurora Award for Best YA Novel and works in the community doing writing workshops for youths and adults. On top of being a YA writer, Sarah has a PhD in English, which makes her a doctor, so it turns out she didn’t have to go to medical school after all. As an academic, Sarah has taught undergraduate courses and acted as a postdoctoral fellow. Her research concerns representations of race and gender in popular media culture, youth culture, and postcolonialism. She has written and edited articles in political, cultural, and academic publications. She continues to use her voice for good. You can find her online at SarahRaughley.com.

"This series opener has it all: strong females, intrigue, a dash of romance, monsters, and a sequel in the wings."
— Kirkus Reviews on FATE OF FLAMES

"A complicated and dramatic adventure."
— School Library Journal on SIEGE OF SHADOWS