Gridiron: Stories from 100 Years of the National Football League (Hardcover) 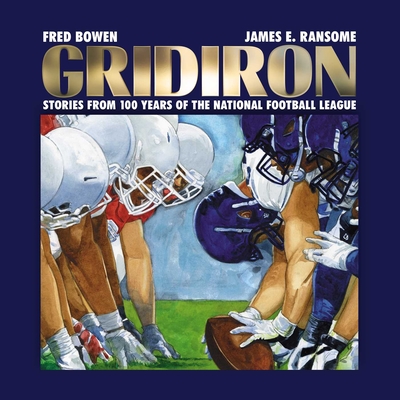 This accessible, informative, and beautifully illustrated book celebrates the 100th anniversary of the NFL and is the perfect keepsake for football fans of all ages.

The National Football League is the most popular sports league in the United States. Its championship game, the Super Bowl, is watched by millions of people every year. But it wasn’t always like this. In the last one hundred years, football has changed from a poorly organized, often overlooked sport to America’s favorite pastime. Here are the stories of that remarkable transformation. The stories of the greatest players, the most successful coaches, the most memorable games—and the amazing plays that made us gasp as we watched them in stadiums and on televisions all over America.

Discover the league’s scrappy beginnings in an automobile showroom, and early players like Red Grange, the Galloping Ghost. Relive the very first championship game, played indoors after a circus had visited, and famous games like the Ice Bowl. See the NFL at war, and meet some of the remarkable athletes who helped desegregate the league. Learn how the draft came into existence, and about the teams that strove for that almost impossible goal—a perfect season.

Veteran sportswriter Fred Bowen brings his in-depth knowledge and lively prose to these fascinating stories, and award-winning artist James E. Ransome has created stunning full-page illustrations that bring the sport of football to life like never before.

Fred Bowen is the author of Gridiron and more than twenty additional children’s books about sports, and for the past twenty years has written the weekly KidsPost column in The Washington Post. Fred lives in Maryland with his family. Visit him at FredBowen.com.

James E. Ransome’s highly acclaimed illustrations for Before She Was Harriet received the 2018 Coretta Scott King Illustrator Honor. His other award-winning titles include the Coretta Scott King winner The Creation; Coretta Scott King Honor Book Uncle Jed’s Barbershop; Sweet Clara and the Freedom Quilt; and Let My People Go, winner of the NAACP Image Award. He frequently collaborates with his wife, author Lesa Cline-Ransome. One of their recent titles is Game Changers: The Story of Venus and Serena Williams, which received four starred reviews and was an ALA Notable Children’s Book. James is a professor and coordinator of the MFA Illustration Graduate Program at Syracuse University. He lives in New York’s Hudson River Valley region with his family. Visit James at JamesRansome.com.

* "Sports enthusiasts of any age are sure to find it a winner...a touchdown."
— Shelf Awareness, starred review