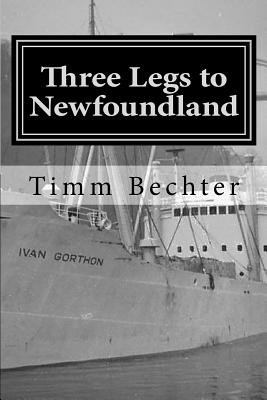 Instead of heading for the ski slopes or south for fun in the sun and sand, University of Virginia business school buddies, Timm and Mylan, opt for winter "vacation" aboard a merchant cargo ship carrying a full load of recycled paper up to the frigid north: Corner Brook, Newfoundland. An inside look at merchant vessel operations, a raucous New Year's Eve party, snow storms and white outs add up to an adventure they - and you - will never forget.

Timm Bechter was born in New Haven, Connecticut in 1963, the first of four children. His parents moved the growing family back and forth between Connecticut and Vermont as Timm's father taught economics and mathematics at Middlebury College and Connecticut College for Women and worked on his PhD dissertation at Yale over seven years. In 1970 the family moved to Liberty, Missouri, a suburb of Kansas City. An athlete growing up, Timm's prowess on the baseball field helped him get into the U.S. Naval Academy in 1981 after graduating from Liberty High School. Timm served in the U.S. Navy upon graduation in 1985 and was a division officer on board the USS Vandegrift (FFG-48) out of Long Beach, California from 1987-1990. He married his wife Elizabeth "Libbie" in 1990 after being honorably discharged from the navy. He worked as an environmental professional and plant manager for a lightweight aggregate producer in Virginia before attending The University of Virginia's Darden Graduate School of Business from 1997-1999. Upon graduating from Darden he began a 12-year career as an equity analyst before leaving the profession in 2011 to become an author and private investor. Timm and Libbie make their home in Goochland County Virginia.