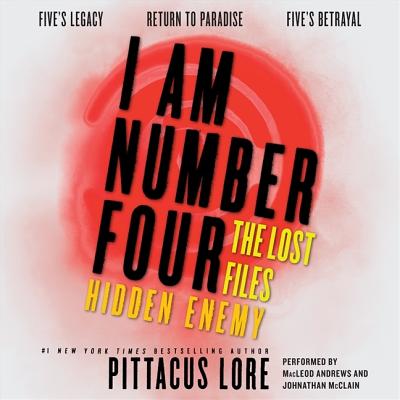 I Am Number Four: The Lost Files: Hidden Enemy is the third collection of action-packed novellas from Pittacus Lore. Initially published separately as digital originals, these three stories are now together in one volume.

Lost Files: #7: Five's Legacy tells the story of Five's early years on Earth when he was just a young teen on the run, discovering his abilities and making the wrong kind of friends.

Lost Files: #8: Return to Paradise picks up in the aftermath of the Mog attack on Ohio and follows Mark James as he struggles between returning to a normal life and helping John Smith and the others.

Lost Files: #9: Five's Betrayal is the exhilarating continuation of Five's story, in which he joins the Mogadorian ranks and must demonstrate his allegiance to them by helping to destroy the other Lorien survivors.

You know the truth about the Mogadorians' invasion of Earth and the Garde who will do anything to defeat them--yet there is still so much to learn. The stories in Hidden Enemy will help you get the answers you seek, but they will not help you stop the coming war. Only the Garde can save our planet.