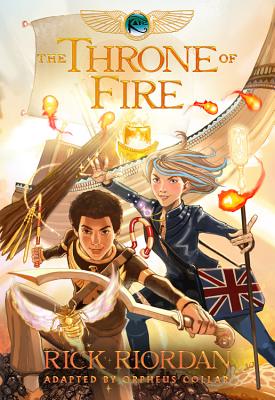 In this exciting second installment of the three-book series, Carter and Sadie, offspring of the brilliant Egyptologist Dr. Julius Kane, embark on a worldwide search for the Book of Ra, but the House of Life and the gods of chaos are determined to stop them.This non-stop thrill ride is adapted and brought to life by Orpheus Collar, who developed the first Kane Chronicles graphic novel and worked on The Lightning Thief; The Graphic Novel; The Lost Hero, The Graphic Novel; and many other titles including The Amazing Spider-Man and Ultimate X-Men.

PRAISE FOR THE LOST HERO, THE GRAPHIC NOVEL"It goes without saying that this book will fly off the shelves..."—<EM>School Library Journal</EM>

PRAISE FOR THE TITAN'S CURSE, THE GRAPHIC NOVEL"...no fan will be able to turn this down."—<EM>Booklist</EM>

PRAISE FOR THE RED PYRAMID, THE GRAPHIC NOVEL"Packed with intense action sequences and a large cast of dynamic characters, this highly condensed version is busy without being overwhelming."—<EM>VOYA</EM>

PRAISE FOR THE SEA OF MONSTERS, THE GRAPHIC NOVEL"Both high in quality and sure to be popular, this is a first purchase."—<EM>School Library Journal</EM>