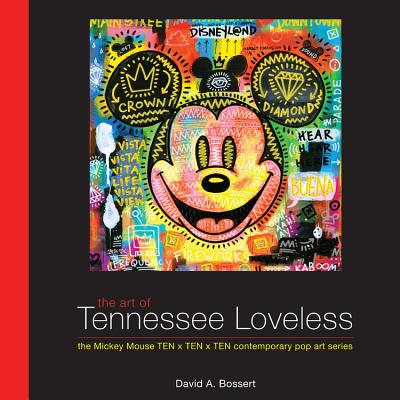 By David A. Bossert, Tennessee Loveless (Illustrator)
$50.00
Email or call for price.

This stunning, colorful, and vastly diverse art collection showcases 100 paintings of Walt Disney's Mickey Mouse by contemporary pop artist Tennessee Loveless. Explore Tennessee's fascinating methodology: a story about the power of art, overcoming obstacles, and following your dreams.
When he was growing up in the southern United States, Tennessee Loveless didn't know that he was so different from other children in his grade school class. Then one day, he and his classmates were asked to choose a purple object in the room. Everyone else seemed to find this an easy task, while Tennessee slumped down, paralyzed with fear. He couldn't do it. His teacher picked him up, at which point he started crying. Tennessee's parents were called; tests were done; and Tennessee was diagnosed with limited achromatopsia, which is the state of being almost completely color-blind. Tennessee's inability to distinguish most hues has, if anything, made him obsessed with the formation of patterns, objects, and shapes. Early on, he became attracted to the destruction of white space and captivated with the idea of filling in anything lacking in form with a pattern. Later, he learned in color-theory books what hues complemented or contrasted each other appropriately and went on to develop his own numerically based color indexing system.
In creating his Mickey Mouse art collection, Tennessee uses bold colors and patterns to evoke an immediate visual impact. He is driven by his passion for painting people, iconic images, and his own visual iconography in a way that strikes an emotional and nostalgic connection through command over the one thing he is blind to: color.

David A. Bossert is an award-winning artist, filmmaker, and author. He is a thirty-two-year veteran of The Walt Disney Company and is an independent producer and creative director. Dave is considered an authority and expert on Disney animation and history. He co-authored Disney Animated, which was named iPad App of 2013 by Apple and won a prestigious British Academy of Film and Television Arts (BAFTA) Award. He is also the author of Remembering Roy E. Disney: Memories and Photos of a Storied Life; An Animator's Gallery: Eric Goldberg Draws the Disney Characters; and Dali and Disney: Destino'The Story, Artwork, and Friendship Behind the Legendary Film; and Oswald the Lucky Rabbit: The Search for the Lost Disney Cartoons. You can connect with Dave on social media and/or at www.davidbossert.com.

PRAISE FOR THE ART OF TENNESSEE LOVELESS
"As an artist, Loveless pays homage to a range of styles from Mehandi, a form or Indian sin decoration, to a collection of stamps, all featuring Mickey Mouse prominently as the centerpiece of the creation. He also uses this forum to touch on important social issues including the impact of capitalism on our imagination."—Advocate

PRAISE FOR THE ART OF TENNESSEE LOVELESS
"What makes Loveless' achievement so remarkable is that the artist is severely colourblind and only understands colour from a formulaic concept based on color theory as opposed to the actual colours themselves. As this deluxe volume makes clear, Tennessee Loveless-despite the numerous obstacles he has had to overcome in his life and career-has heroically pursued his art, motivated by a passion for painting people and fictional characters such as the Disney Mouse in a ways that make a strong connection with our nostalgic memories using the power of colours unseen by the artist who painted them. You may feel that 100 Mickey Mice is a few dozen more than you truly need, but the cumulative effect of this extraordinary array of paintings-many of them with an ironic tip of the mouse-ears to, among others, those celebrated Mickey-takers Andy Warhol and Keith Haring-is an unquestioned artistic tour de force."—Brian Sibley, writer, broadcaster, and Disney scholar