SEO 2013 And Beyond: Search engine optimization will never be the same again! (Webmaster #1) (Paperback) 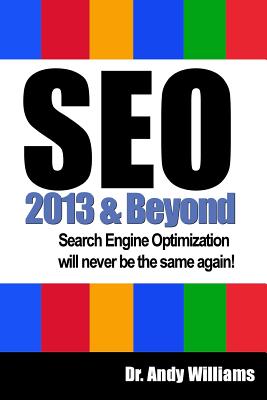 This is book number 1 in the Webmaster series.

If the SEO book/course you are putting your faith into was written before September 2012, then you could be following advice that will get your site penalized, or even removed from Google. Google made massive changes in 2011, but even more significant changes in 2012. Strategies taught as best principles in early 2012 are now considered "black hat" or just plain risky in 2013. SEO 2013 & Beyond will tell you what you can do and what you cannot.

Let's look at what happened.

On February 11th, 2011, Google dropped a bombshell on the SEO community when they released the Panda update. Panda was designed to remove low quality content from the search engine results pages. The surprise to many were some of the big name casualties that were taken out by the update.

On 24th April 2012, Google went in for the kill when they released the Penguin update. Few SEOs that had been in the business for any length of time could believe the carnage that this update caused. If Google's Panda was a 1 on the Richter scale of updates, Penguin was surely a 10. It completely changed the way we need to think about SEO.

On September 28th 2012, Google released a new algorithm update targeting exact match domains (EMDs). I have updated this book to let you know the consequences of owning EMDs and added my own advice on choosing domain names. While I have never been a huge fan of exact match domains anyway, many other SEO books and courses teach you to use them. I'll tell you why I think those other courses and books are wrong.

The EMD update was sandwiched in between another Panda update (on the 27th September) and another Penguin update (5th October).

Whereas Panda seems to penalize low quality content, Penguin is more concerned about overly aggressive SEO tactics. Stuff that SEOs had been doing for years, not only didn't work any more, but now can actually cause your site to be penalized and drop out of the rankings. That's right, just about everything you have been taught about Search Engine Optimization in the last 10 years can be thrown out the Window. Google have moved the goal posts.

I have been working in SEO for around 10 years and have always tried to stay within the guidelines laid down by Google. This has not always been easy because to compete with other sites, it often meant using techniques that Google frowned upon. Now, if you use those techniques, Google is likely to catch up with you and demote your rankings.

In this book, I want to share with you the new SEO. The SEO for 2013 and Beyond.