Staking Claims to a Continent (Paperback) 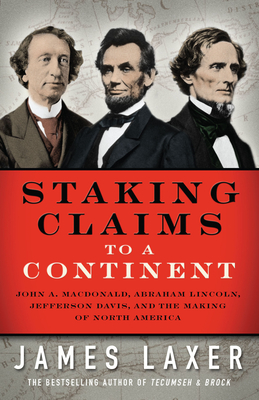 Three political leaders presided over the reshaping of the North American continent during the fiery 1860s. Jefferson Davis and Abraham Lincoln were both born in Kentucky, Davis in June 1808 and Lincoln the following February. John A. Macdonald was born in Glasgow, Scotland, in January 1815. All were Protestants; none came from a wealthy family. In an earlier era, such men would not have risen to political heights. They personified an age of social and economic transformation, thrust to the top by the very forces that tore the continent apart.

Davis tried to create a country by ripping the South out of the United States and establishing the Confederate States of America during the Civil War. Lincoln's crusade to save the Union honed the industrial-military power that would one day dominate the world. Macdonald led the drive to shepherd the diverse British North American provinces into a federal state that would secure the northern half of the continent and keep Canada out of American hands.

In a high stakes game, these three national projects competed to create viable nation states. And the success or failure of the projects would have consequences -- not only for the long-term future of the continent but also for the entire global order.