On the Queerness of Early English Drama: Sex in the Subjunctive (Hardcover) 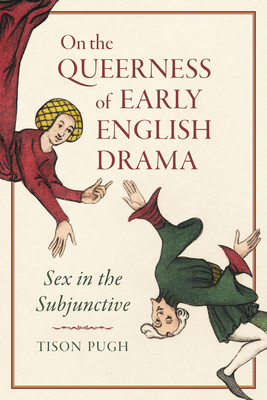 Often viewed as theologically conservative, many theatrical works of late medieval and early Tudor England nevertheless exploited the performative nature of drama to flirt with unsanctioned expressions of desire, allowing queer identities and themes to emerge. Early plays faced vexing challenges in depicting sexuality, but modes of queerness, including queer scopophilia, queer dialogue, queer characters, and queer performances, fractured prevailing restraints. Many of these plays were produced within male homosocial environments, and thus homosociality served as a narrative precondition of their storylines.

Building from these foundations, On the Queerness of Early English Drama investigates occluded depictions of sexuality in late medieval and early Tudor dramas. Tison Pugh explores a range of topics, including the unstable genders of the York Corpus Christi Plays, the morally instructive humour of excremental allegory in Mankind, the confused relationship of sodomy and chastity in John Bale's historical interludes, and the camp artifice and queer carnival of Sir David Lyndsay's Ane Satyre of the Thrie Estaitis. Pugh concludes with Terrence McNally's Corpus Christi, pondering the afterlife of medieval drama and its continued utility in probing cultural constructions of gender and sexuality