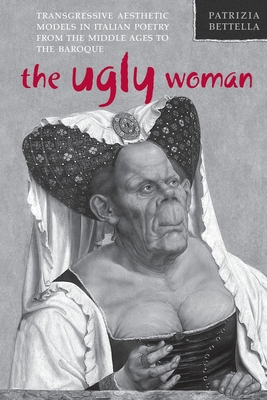 The ugly woman is a surprisingly common figure in Italian poetry, one that has been frequently appropriated by male poetic imagination to depict moral, aesthetic, social, and racial boundaries. Mostly used between the thirteenth and seventeenth centuries - from the invectives of Rustico Filippi, Franco Sacchetti, and Burchiello, to the paradoxical praises of Francesco Berni, Niccol Campani and Pietro Aretino, and further to the conceited encomia of Giambattista Marino and Marinisti - the portrayal of female unattractiveness was, argues Patrizia Bettella in The Ugly Woman, one way of figuring woman as 'other.'

Bettella shows how medieval female ugliness included transgressive types ranging from the lustful old hag, to the slanderer, the wild woman, the heretic/witch, and the prostitute, whereas Early Modern unattractiveness targeted peasants, mountain dwellers, and black slaves: marginal women whose bodies and manners subvert aesthetic precepts of culturally normative beauty and propriety. Taking a philological and feminist approach, and drawing on the Bakhtinian concept of the grotesque body and on the poetics of transgression, The Ugly Woman is a unique look at the essential counterdiscourse of the celebrated Italian poetic canon and a valuable contribution to the study of women in literature.