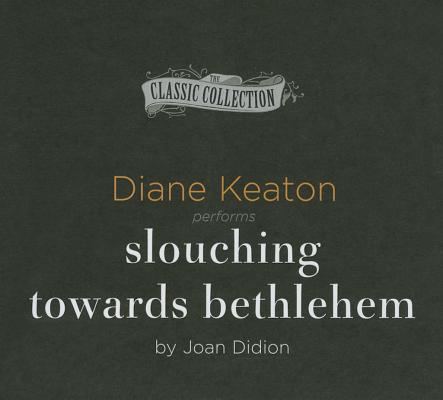 Universally acclaimed from the time it was first published in 1968, Slouching Towards Bethlehem has been admired for decades as a stylistic masterpiece. Academy Award-winning actress Diane Keaton (Annie Hall, The Family Stone) performs these classic essays, including the title piece, which will transport the listener back to a unique time and place: the Haight-Ashbury district of San Francisco during the neighborhood's heyday as a countercultural center.

This is Joan Didion's first work of nonfiction, offering an incisive look at the mood of 1960s America and providing an essential portrait of the Californian counterculture. She explores the influences of John Wayne and Howard Hughes, and offers ruminations on the nature of good and evil in a Death Valley motel room. Taking its title from W. B. Yeats' poem "The Second Coming," the essays in Slouching Towards Bethlehem all reflect, in one way or another, that "the center cannot hold."

Slouching Towards Bethlehem is part of Audible's A-List Collection, featuring the world's most celebrated actors narrating distinguished works of literature that each star had a hand in selecting.