Learning Swift: Building Apps for Macos, Ios, and Beyond (Paperback) 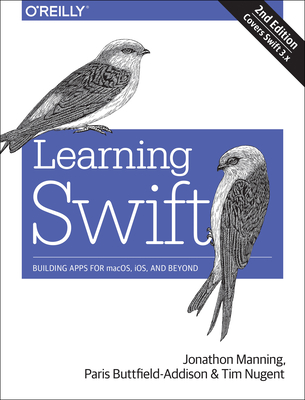 By Paris Buttfield-Addison, Jonathon Manning, Tim Nugent
This item is not available.
Out of Print

Get valuable hands-on experience with Swift 3, the latest version of Apple's programming language. With this practical guide, skilled programmers with little or no knowledge of Apple development will learn how to code with Swift 3 by developing three complete, tightly linked versions of the Notes application for the OS X, iOS, and watchOS platforms.

In the process, you'll learn Swift's fundamentals, including its syntax and features, along with the basics of the Cocoa, CocoaTouch, and WatchKit frameworks. This book teaches you how to use common design patterns for Swift, how to structure an application for Apple's platforms, and how to submit working apps to the App Store.

Paris Buttfield-Addison is a producer and co-founder at Secret Lab, a mobile development studio based in beautiful Hobart, Australia. Secret Lab builds games for mobile devices, and primarily for children, such as the AIMIA winning (2014) ABC Play School apps for iPad.Paris formerly worked with Meebo (which was acquired by Google) as mobile product manager. He has a BA in History, and a PhD in Computing/HCI, and has written nearly a dozen technical, game design, and mobile development books, mostly for O'Reilly Media.Paris can be found on Twitter @parisba. He still thinks digital watches are a pretty neat idea.For more info visit Secret Lab or paris.id.au.Jon Manning is a world renown iOS development trainer and writer, game designer and mobile software engineering wizard.He has co-authored two books on mobile development and enjoys re-implementing such things as OpenGL and the Objective-C runtime (in his spare time).Jon is also a researcher in Human-Computer Interaction working towards a PhD.Tim Nugent pretends to be a mobile app developer, game designer, PhD student, and now he even pretends to be an author. When he isn't busy avoiding being found out as a fraud, he spends most of his time designing and creating little apps and games he won't let anyone see. Tim spent a disproportionately long time writing this tiny little bio, most of which was spent trying to stick a witty sci-fi reference in, before he simply gave up. Tim can be found as @The_McJones on Twitter.