Windows 10: The Missing Manual: The Book That Should Have Been in the Box (Paperback) 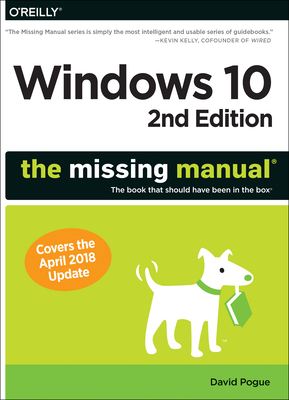 By David Pogue
This item is not available.
Out of Print

Windows 10 hit the scene in 2015 with an all-new web browser (Edge), the Cortana voice assistant, and universal apps that run equally well on tablets, phones, and computers. Now, the Creators Update brings refinement and polish to Windows 10--and this jargon-free guide helps you get the most out of this supercharged operating system.

Windows 10: The Missing Manual covers the entire system, including all the new features, like the three-column Start menu, the extensions in the Microsoft Edge browser, Paint 3D, and live game broadcasting.

You'll learn how to:

Written by David Pogue--tech critic for Yahoo Finance and former columnist for The New York Times--this updated edition illuminates its subject with technical insight, plenty of wit, and hardnosed objectivity.

David Pogue is the founder of Yahoo Tech, having been groomed for the position by 13 years as the personal-technology columnist for the New York Times. He's also a monthly columnist for Scientific American and host of science shows on PBS's "NOVA." He's been a correspondent for "CBS Sunday Morning" since 2002.With over 3 million books in print, David is one of the world's bestselling how-to authors. He wrote or co-wrote seven books in the "for Dummies" series (including Macs, Magic, Opera, and Classical Music); in 1999, he launched his own series of complete, funny computer books called the Missing Manual series, which now includes 120 titles.David graduated summa cum laude from Yale in 1985, with distinction in Music, and he spent ten years conducting and arranging Broadway musicals in New York. He's won two Emmy awards, two Webby awards, a Loeb award for journalism, and an honorary doctorate in music.