Presto: The Definitive Guide: SQL at Any Scale, on Any Storage, in Any Environment (Paperback) 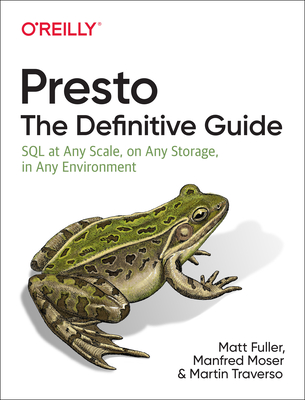 By Matt Fuller, Manfred Moser, Martin Traverso
This item is not available.
Out of Print

Perform fast interactive analytics against different data sources using the Presto high-performance, distributed SQL query engine. With this practical guide, you ll learn how to conduct analytics on data where it lives, whether it 's Hive, Cassandra, a relational database, or a proprietary data store. Analysts, software engineers, and production engineers will learn how to manage, use, and even develop with Presto.

Initially developed by Facebook, open source Presto is now used by Netflix, Airbnb, LinkedIn, Twitter, Uber, and many other companies. Matt Fuller, Manfred Moser, and Martin Traverso show you how a single Presto query can combine data from multiple sources to allow for analytics across your entire organization.

Matt Fuller is a cofounder at Starburst, the Presto Company. Prior to founding Starburst, Matt was a director of engineering at Teradata, where he worked to build the new Center for Hadoop division within the company. As a major part of this, Matt worked to bring Presto to the enterprise market. Matt has managed a team contributing to the open source Presto project since 2015 and led the internal Presto product roadmap. Starburst was later formed from this team at Teradata.Before Teradata, Matt was an early engineer at Vertica, where he co-built the query optimizer. Matt is also a Very Large Databases (VLDB) published author and has US patents in the database management systems space.Manfred Moser is a community advocate, writer, trainer and software engineer at Starburst. Manfred has a long history of developing and advocating open source software. He is an Apache Maven committer, wrote the Hudson book and others, and continues to be active in the open source community and his projects. He is a seasoned trainer and conference presenter for CI/CD, Cloud Native, Agile and other softwaredevelopment tools and processes, having trained well over 20,000 developers for companies including Walmart Labs, Sonatype, and Telus.His database background includes designing databases and related applications in the RDBMS space and working as business intelligence consultant wrangling thousands of lines of SQL by hand. He is glad he can use Presto now, and is spreading the word about how great Presto is.Martin Traverso is the cofounder of the Presto Software Foundation and CTO at Starburst. Prior to Starburst, Martin worked as a software engineer at Facebook where he saw the need for fast interactive SQL analytics. Martin and three other engineers worked to create what became Presto. Martin led the Presto development team and in the spring of 2013 Presto was rolled out into production, later made opensource in the fall of 2013. Since then, Presto has gained wide adoption both internal and external to Facebook.Prior to Facebook, Martin was an architect at Proofpoint and Ning, where he led development and architecture design of numerous complex enterprise and social network applications.