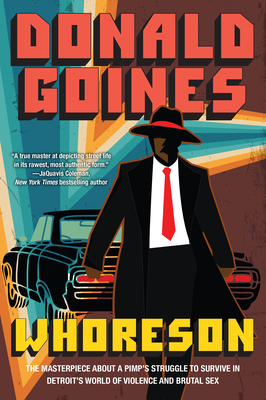 Now reissued with a fresh new look, the first novel written by Donald Goines, one of the most revolutionary writers of the 20th century. Written while he was in prison and rumored to be his most autobiographical, this uncensored, gritty book has gone on to inspire street lit and hip hop culture as we know it today.

“After my ninth birthday I began to really understand the meaning of my name. I began to understand just what my mother was doing for a living. There was nothing I could do about it, but even had I been able to, I wouldn’t have changed it.”

Whoreson Jones is the son of a beautiful black prostitute and an unknown white john. As a child, he’s looked after by his neighborhood’s imposing matriarch, Big Mama, while his mother works. At age twelve, his street education begins when a man named Fast Black schools him in trickology. By thirteen, Whoreson’s a cardsharp. By sixteen, his childhood abruptly ends, and he is a full-fledged pimp, cold-blooded and ruthless, battling to understand and live up to his mother’s words: “First be a man, then be a pimp.”

Donald Goines was born in Detroit, Michigan. He joined the U.S. Air Force instead of going into his family's dry cleaning business. Following his service, he entered into a life of drug addiction and crime. He received seven prison sentences, serving a total of over six years. While he was in prison, Goines wrote his first two novels, Dopefiend: The Story of a Black Junkie and Whoreson: The Story of a Ghetto Pimp. Goines was shot to death in 1974.

"The voice of the ghetto itself." —The Village Voice

“Donald Goines, a brilliant writer of street literature captures the pain of addiction perfectly.”
—Black Enterprise, The 18 Best Books of All Time on Dopefiend

“Goines’ influence on hip-hop, pulp-fiction, movies, and scores of authors deserves as much praise as a James Baldwin or Richard Wright, who also wrote about Black life in the ghetto.”
—Darryl Robertson, Hip hop journalist

“A true master at depicting street life in it rawest, most authentic form, Mr. Goines mastered the art of storytelling from the darkest corner of America: the ghetto. His brilliance still shines through and touches the soul of modern black culture.”
—JaQuavis Coleman, New York Times bestselling author

"I learned to read on Donald Goines. His books are classics." —Carl Weber, New York Times bestselling author and founder of Urban Books

"A timeless writer, Donald Goines laid the foundation for all who came after. Fifty years later, his novels continue to inspire urban fiction from one generation to the next.”
—Wahida Clark, New York Times bestselling author

“He lived by the code of the streets and his books vividly recreated the street jungle and its predators.” —New Jersey Voice

“Donald Goines is one of Hip Hop’s Greatest Inspirations.” —The Source Magazine

“Goines put you right there in the action.” —AllHipHop.com