Emmett Till: The Murder That Shocked the World and Propelled the Civil Rights Movement (Race) (Paperback) 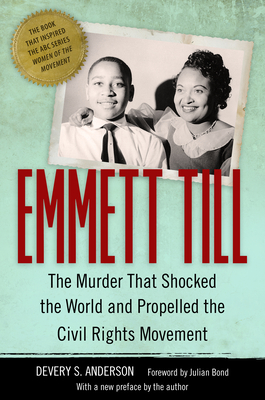 Emmett Till: The Murder That Shocked the World and Propelled the Civil Rights Movement offers the first, and as of 2018, only comprehensive account of the 1955 murder, the trial, and the 2004-2007 FBI investigation into the case and Mississippi grand jury decision. By all accounts, it is the definitive account of the case. It tells the story of Emmett Till, the fourteen-year-old African American boy from Chicago brutally lynched for a harmless flirtation at a country store in the Mississippi Delta. Anderson utilizes documents that had never been available to previous researchers, such as the trial transcript, long-hidden depositions by key players in the case, and interviews given by Carolyn Bryant to the FBI in 2004 (her first in fifty years), as well as other recently revealed FBI documents. Anderson also interviewed family members of the accused killers, most of whom agreed to talk for the first time, as well as several journalists who covered the murder trial in 1955. Till's murder and the acquittal of his killers by an all-white jury set off a firestorm of protests that reverberated all over the world and spurred on the civil rights movement. Like no other event in modern history, the death of Emmett Till provoked people all over the United States to seek social change. Anderson's exhaustively researched book was also the basis for the ABC miniseries Women of the Movement, which was written/executive-produced by Marissa Jo Cerar; directed by Gina Prince-Bythewood, Tina Mabry, Julie Dash, and Kasi Lemmons; and executive-produced by Jay-Z, Jay Brown, Tyran "Ty Ty" Smith, Will Smith, James Lassiter, Aaron Kaplan, Dana Honor, Michael Lohmann, Rosanna Grace, Alex Foster, John Powers Middleton, and David Clark. For over six decades the Till story has continued to haunt the South as the lingering injustice of Till's murder and the aftermath altered many lives. Fifty years after the murder, renewed interest in the case led the Justice Department to open an investigation into identifying and possibly prosecuting accomplices of the two men originally tried. Between 2004 and 2005, the Federal Bureau of Investigation conducted the first real probe into the killing and turned up important information that had been lost for decades. Anderson covers the events that led up to this probe in great detail, as well as the investigation itself. This book will stand as the definitive work on Emmett Till for years to come. Incorporating much new information, the book demonstrates how the Emmett Till murder exemplifies the Jim Crow South at its nadir. The author accessed a wealth of new evidence. Anderson made a dozen trips to Mississippi and Chicago over a ten-year period to conduct research and interview witnesses and reporters who covered the trial. In Emmett Till, Anderson corrects the historical record and presents this critical saga in its entirety.

Devery S. Anderson earned a bachelor's degree in history from the University of Utah and a master's in publishing from George Washington University. He is editor or coeditor of four books related to Mormons and the West, two of which won the Steven F. Christensen Award for Best Documentary from the Mormon History Association in 2006. His book Emmett Till: The Murder That Shocked the World and Propelled the Civil Rights Movement was the basis for the ABC miniseries Women of the Movement.