Gary Larson and the Far Side (Great Comics Artists) (Paperback) 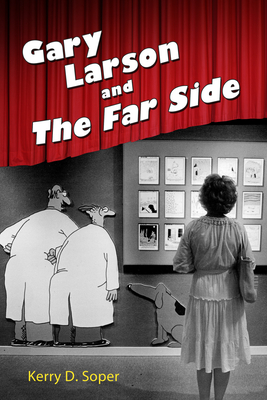 Kerry D. Soper reminds us of The Far Side's groundbreaking qualities and cultural significance in Gary Larson and "The Far Side." In the 1980s, Gary Larson (b. 1950) shook up a staid comics page by introducing a set of aesthetic devices, comedic tones, and philosophical frames that challenged and delighted many readers, even while upsetting and confusing others. His irreverent, single panels served as an alternative reality to the tame comedy of the family-friendly newspaper comics page, as well as the pervasive, button-down consumerism and conformity of the Reagan era.

In this first full study of Larson's art, Soper follows the arc of the cartoonist's life and career, describing the aesthetic and comedic qualities of his work, probing the business side of his success, and exploring how The Far Side brand as a whole--with its iconic characters and accompanying set of comedic and philosophical frames--connected with its core readers. In effect, Larson reinvented his medium by creatively working within, pushing against, and often breaking past institutional, aesthetic, comedic, and philosophical parameters.

Due to the comic's great success, it opened the door for additional alternative voices in comics and other popular mediums. With its intentionally awkward, minimalistic lines and its morbid humor, The Far Side expanded Americans' comedic palette and inspired up-and-coming cartoonists, comedians, and filmmakers. Soper re-creates the cultural climate and media landscape in which The Far Side first appeared and thrived, then assesses how it impacted worldviews and shaped the comedic sensibilities of a generation of cartoonists, comedy writers, and everyday fans.

Kerry D. Soper is professor in the Department of Comparative Arts and Letters at Brigham Young University. He is author of Garry Trudeau: Doonesbury and the Aesthetics of Satire and We Go Pogo: Walt Kelly, Politics, and American Satire, both published by University Press of Mississippi. A longtime fan of The Far Side, Soper also occasionally publishes cartoons and short satirical pieces in the Chronicle of Higher Education and other venues.