The Alien Next Door 1: The New Kid (Hardcover) 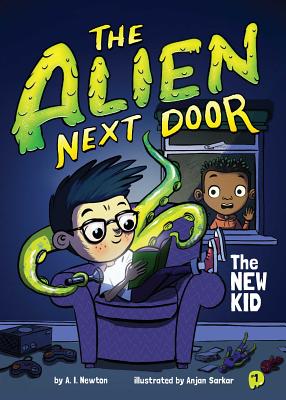 This is book number 1 in the The Alien Next Door series.

In the first book of the brand-new early chapter book series, the Alien Next Door, an alien boy named Zeke tries to fit in and adjust to life on Earth, while a classmate, Harris, suspects that Zeke might not be quite what he claims to be.

Zeke the alien is on his way to his first day of school, feeling down because he has to start over again on a new planet, as his scientist parents constantly move to wherever their research takes them. When he gets to school, no one seems to notice anything strange or different about him except Harris, a kid obsessed with science fiction and aliens. Harris sees Zeke doing extraordinary things but can't convince anyone, least of all his best friend, Roxy, that Zeke might be an alien. Roxy just thinks Harris is jealous that she's becoming friends with Zeke. But when Roxy invites Zeke over to Harris's house, will Harris find a way to prove that he's right?

A.I. Newton always wanted to travel into space, visit another planet, and meet an alien. When that plan didn't work out, he decided to do the next best thing-write stories about aliens and space travel! The ALIEN NEXT DOOR series gives him a chance to imagine what it's like to hang out with an alien. And you can do the same-unless, of course, you are lucky enough to live next door to a real-life alien!

Anjan Sarkar graduated from Manchester Metropolitan University with a degree in illustration in 2001. After that, he worked as an illustrator and graphic designer before becoming a freelancer in 2004, where he gets to work on all sorts of different illustration projects for people of all ages! He lives in Sheffield, UK. Find out more about Anjan at anjansarkar.co.uk.