The Messy Life of Blue (Hardcover) 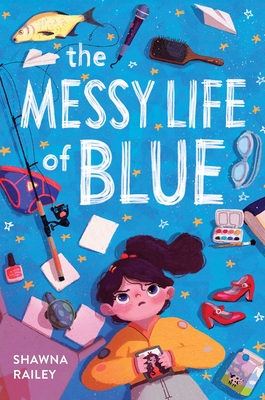 "Readers will laugh out loud, cry, and commiserate with her every step of the way....The protagonist is a feisty, mixed-up, phenomenal delight." Kirkus Reviews

"Shawna Railey has crafted a funny, sensitive, yet relatable narrative around her title character. Anyone who has experienced loss can understand Blue's attempts to come to terms with it. A strong debut novel that would be an excellent recommendation for any reader looking for books on loss and sibling relationships." Booklist

"A book for our times."-Betsy Bird for School Library Journal

Eleven-year-old "Blue" Warren is cursed with three bothersome brothers, a too-busy father, a recently deceased mother, and she's annoyed. With humor, hijinks, and heart, this debut novel is a touching tale of grief and the healing power of family.

Eleven-year-old Beulah "Blue" Warren spends every waking moment surrounded by boys: her three brothers, her father, her best friend, even the family dog, but that's never stopped her from being her usual rambunctious self. Grappling with the loss of her mother, Blue is determined to do what she wants without fear of consequences. When she is sent to the principal's office, she gets out of it like a pro. When the witchy neighbor next door trashes her yard, Blue doesn't just get even, she gets ahead. No clean underwear because she hasn't done the laundry? No worries. That's what her little brother's Superman underwear is for, isn't it? But everything changes on the day she explores the attic and finds her mother's death certificate. Blue will need to muster all the strength she has to deal with the truth, find forgiveness, trust in her father, and grieve for her mother once and for all.

Shawna Railey taught herself to read at age three and started writing stories when she was only four years old. Born and raised in Southern California, it was hard to compete with the beach in her backyard . . . but that's exactly what books did.

Now that she's lived in Colorado with her daughter for over a decade, she has a new love in the Rocky Mountains. If she isn't reading or writing, you can find her golfing, hiking, camping, playing poker, enjoying a movie, or putting together her extensive Harry Potter Lego collection. The Messy Life of Blue is her first novel.

Eleven-year-old Blue-never Beulah-fears that she is a bad person because memories of her deceased mother are fading.She is the only girl in the family, and there are plenty of extreme sibling shenanigans and issues with her neighborhood nemesis, Crybaby Jared, but she definitely gives as good as she gets and then some. She wishes she could talk to her father about her feelings, but she senses his own grief and sadness. She lists her mother's interests and attributes and sets goals to emulate her. Jumping into her schemes with little thought to possible repercussions often leads to disappointment, embarrassment, or general hilarity. Blue's chatty narration of these episodes is always true to her sometimes-limited vision of the events she reports, and she readily admits her errors. Baby brother Arnie grows less irritating while oldest brother Seth and even her most difficult brother, Jackson, show occasional signs of empathy and kindness. Devastating secrets are revealed and there's a surprising, defining moment when she realizes that she loves her wild, weird brothers, and they love her, at least most of the time, and she can always remember her mother in her heart. Things are not tied up in a neat ribbon, but her life might become a tad less messy; readers will laugh out loud, cry, and commiserate with her every step of the way. Blue and her family seem to be white.The protagonist is a feisty, mixed-up, phenomenal delight.
— Kirkus Reviews

Beulah (Blue) Warren has been the only girl in a house full of boys ever since her mother died.
Although she is generally a happy and intrepid fifth-grader, Blue begins to fear that she is
forgetting her mother. In a frantic attempt to hold onto cherished memories, Blue makes a list of
all the things that made her mother special and tries to imitate them in order to feel closer to her
mother. Her attempts result in hilarious and heartwarming misadventures. When a devastating
secret about her mother's death is revealed, Blue struggles to learn how to forgive the people
involved. The death of a parent is a difficult topic for any middle-grade book, but Shawna Railey
has crafted a funny, sensitive, yet relatable narrative around her title character. Anyone who has
experienced loss can understand Blue's attempts to come to terms with it. A strong debut novel
that would be an excellent recommendation for any reader looking for books on loss and sibling
relationships.
— Booklist

Eleven-year-old Beulah "Blue" is the only girl in her family of her father and three brothers. Since her mother's death, Blue has been worried about forgetting her-what she looked like and wore, her interests and talents. To refresh her memory, Blue starts a "Mom List," wears her mother's favorite nail polish, joins an art class, and reads her mother's favorite book, Charlotte's Web. Blue even takes on little jobs to afford buying a pair of shoes that remind her of her mother. Throughout the novel, Blue's family and friends assist her in feeling more connected to her mother. Railey's debut is a touching and humorous tale of family, loss, grief, and friendship. It will be of comfort to readers who may have experienced death in their own families while also giving them a few laughs. Blue is a relatable tween, struggling with being the only girl at home and adjusting to her new family dynamic, all while trying to feel more connected to her late mother. VERDICT A recommended title for middle grade readers who have experienced loss.
— School Library Journal