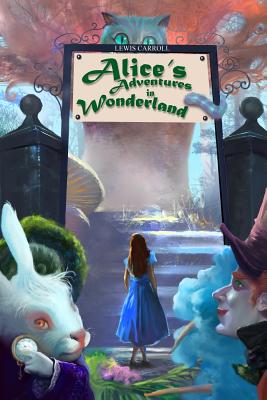 By Duy Phan (Illustrator), Lewis Carroll
$5.99
Usually arrives at our store within 4-7 days

Alice's Adventures in Wonderland (commonly shortened to Alice in Wonderland) is an 1865 novel written by English author Charles Lutwidge Dodgson under the pseudonym Lewis Carroll. It tells of a girl named Alice who falls down a rabbit hole into a fantasy world populated by peculiar, anthropomorphic creatures. The tale plays with logic, giving the story lasting popularity with adults as well as with children. It is considered to be one of the best examples of the literary nonsense genre. Its narrative course and structure, characters and imagery have been enormously influential in both popular culture and literature, especially in the fantasy genre. Background Alice was published in 1865, three years after the Reverend Charles Lutwidge Dodgson and the Reverend Robinson Duckworth rowed in a boat, on 4 July 1862 (this popular date of the "golden afternoon" might be a confusion or even another Alice-tale, for that particular day was cool, cloudy and rainy), up the Isis with the three young daughters of Henry Liddell (the Vice-Chancellor of Oxford University and Dean of Christ Church): Lorina Charlotte Liddell (aged 13, born 1849) ("Prima" in the book's prefatory verse); Alice Pleasance Liddell (aged 10, born 1852) ("Secunda" in the prefatory verse); Edith Mary Liddell (aged 8, born 1853) ("Tertia" in the prefatory verse). The journey began at Folly Bridge near Oxford and ended five miles away in the village of Godstow. During the trip the Reverend Dodgson told the girls a story that featured a bored little girl named Alice who goes looking for an adventure. The girls loved it, and Alice Liddell asked Dodgson to write it down for her. He began writing the manuscript of the story the next day, although that earliest version no longer exists. The girls and Dodgson took another boat trip a month later when he elaborated the plot to the story of Alice, and in November he began working on the manuscript in earnest. To add the finishing touches he researched natural history for the animals presented in the book, and then had the book examined by other children---particularly the children of George MacDonald. He added his own illustrations but approached John Tenniel to illustrate the book for publication, telling him that the story had been well liked by children. On 26 November 1864 he gave Alice the handwritten manuscript of Alice's Adventures Under Ground, with illustrations by Dodgson himself, dedicating it as "A Christmas Gift to a Dear Child in Memory of a Summer's Day". Some, including Martin Gardner, speculate there was an earlier version that was destroyed later by Dodgson when he wrote a more elaborate copy by hand. But before Alice received her copy, Dodgson was already preparing it for publication and expanding the 15,500-word original to 27,500 words, most notably adding the episodes about the Cheshire Cat and the Mad Tea-Party.

The proper name of Lewis Carroll was Charles Lutwidge Dodgson, and he was born at Daresbury, England, on January 27, 1832. Educated at Rugby and at Christchurch, Oxford, he specialised in mathematical subjects. Elected a student of his college, he became a mathematical lecturer in 1855, continuing in that occupation until 1881. His fame rests on the children's classic, "Alice's Adventures in Wonderland," issued in 1865, which has been translated into many languages. No modern fairy-tale has approached it in popularity. The charms of the book are its unstrained humour and its childlike fancy, held in check by the discretion of a particularly clear and analytical mind. Though it seems strange that an authority on Euclid and logic should have been the inventor of so diverting and irresponsible a tale, if we examine his story critically we shall see that only a logical mind could have derived so much genuine humour from a deliberate attack on reason, in which a considerable element of fun arises from efforts to reconcile the irreconcilable. The book has probably been read as much by grown-ups as by young people, and no work of humour is more heartily to be commended as a banisher of care. The original illustrations by Sir John Tenniel are almost as famous as the book itself.