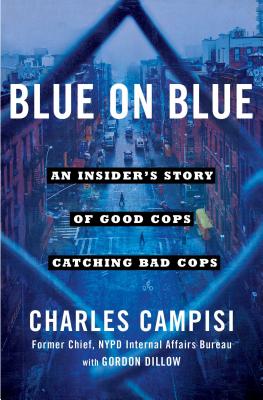 In one of the most illuminating portraits of police work ever, Chief Charles Campisi describes the inner workings of the world’s largest police force and his unprecedented career putting bad cops behind bars. “Compelling, educational, memorable…this superb memoir can be read for its sheer entertainment or as a primer on police work—or both” (Kirkus Reviews, starred review).

From 1996 to 2014 Charles Campisi headed NYPD’s Internal Affairs Bureau, working under four police commissioners and gaining a reputation as hard-nosed and incorruptible. During Campisi’s IAB tenure, the number of New Yorkers shot, wounded, or killed by cops every year declined by ninety percent, and the number of cops failing integrity tests shrank to an equally startling low. But to achieve those exemplary results, Campisi had to triple IAB’s staff, hire the very best detectives, and put the word out that corruption wouldn’t be tolerated.

Blue on Blue provides “a rare glimpse inside one of the most secretive branches of policing…and a compelling, behind-the-scenes account of what it takes to investigate police officers who cross the line between guardians of the public to criminals. It’s a mesmerizing exposé on the harsh realities and complexities of being a cop on the mean streets of New York City and the challenges of enforcing the law while at the same time obeying it” (The New York Journal of Books). Campisi allows us to listen in on wiretaps and feel the adrenaline rush of drawing in the net. It also reveals new threats to the force, such as the possibility of infiltration by terrorists.

“A lively memoir [told with] verve, intriguing detail, and a generous heart” (The Wall Street Journal) and “an expose of the NYPD’s Internal Affairs Bureaus [that is] enlightening and entertaining” (The New York Times Book Review), Blue on Blue will forever change the way you view police work.

Charles Campisi was Chief of the NYPD’s Internal Affairs Bureau from 1996 to 2014. In his years on the job he developed model strategies for investigating corruption, which have been adopted by law enforcement agencies across the US and abroad. A graduate of the FBI National Academy and Harvard’s John F. Kennedy School of Government, he currently works as a Senior VP at the private investigation firm Cyber Diligence. He grew up in Brooklyn, New York.

Gordon Dillow has been a reporter, columnist, and war correspondent for more than thirty years. He has written for a number of newspapers, including The Wall Street Journal and Los Angeles Times, and is the author or coauthor of numerous books. He lives in Scottsdale, Arizona.

“A lively memoir…Mr. Campisi, a Brooklyn kid who had one of the longest careers in the NYPD’s history, has seen it all, and he tells his cop stories with verve, intriguing detail and a generous heart.”
—Wall Street Journal

"An expose of the secretive work of the NYPD's Internal Affairs Bureau . . . enlightening and entertaining."
—New York Times Book Review

“A compelling, educational, memorable account of Campisi’s rise through the police department ranks until he was ordered to accept an assignment no cop ever wanted: to become part of the Internal Affairs Bureau…Campisi found ways to alter the reputation of the bureau while also improving techniques to catch and punish cops who cut corners, stole drugs, or employed excessive force…This superb memoir can be read for its sheer entertainment or as a primer on police work—or both.”
—Kirkus Reviews (starred review)

"The thing about Chief Charles Campisi is that he's a truth teller.  Blue on Blue takes the reader into a shadow world where police officers confront evil and often lose that confrontation. This is a serious look at American police work from a man who has seen it all. You will learn an enormous amount by reading this book."
—Bill O'Reilly, Anchor at FOX News Channel

"A compelling, fascinating, and often harrowing read. In taut prose, Charles Campisi describes the evolution, formation, and institutionalization of a truly professional Internal Affairs Bureau, which he commanded from the mid-1990s until his recent retirement, and which stands as the most important and beneficial development in the modern history of the NYPD—indeed, it is arguably the single greatest achievement in the history of American police work generally. This is a riveting history, wonderful for general readers and essential for all modern police forces to study and absorb."
—Caleb Carr, New York Times bestselling author of The Alienist and Surrender, New York

“Blue on Blue is a refreshing, behind-the-wall-of-silence look at what goes on—and why—in big city police departments. Campisi stockpiles his story arsenal with riveting history, experience, anecdotal evidence and high emotion, continually reminding us of the beacon he kept in sight throughout his career, which was to stay on the up and up no matter what.  It all adds up to the real deal from a solid confidential informant.”
—Theresa Schwegel, Edgar Award winning author of Officer Down

“A must-read for those who want to know the real story behind police misconduct, written with unvarnished frankness by the man who knows the most about the problem. Told with the same gripping intensity as the best true crime, Blue on Blue takes the reader inside the most highly publicized investigations as they happened.”
—Thomas Reppetto, author of the two-volume American Police: 1845-2012

“Reading Blue on Blue is like losing yourself in a good detective novel, except for two things.  It’s fact, not fiction.  And the bad guys are cops, being chased by good guys who are cops.  No one has more insight into the hard work of ensuring integrity in policing than Charles Campisi, the NYPD’s longest serving head of internal affairs.  This book should inspire others to follow his example.”
—Jeremy Travis, President of John Jay College of Criminal Justice and Former Director of the National Institute of Justice

“Blue on Blue is as important as it is timely.  This is police work as it happens every day, told by a determined and dedicated cop, Charlie Campisi, who never wavered from his mission: to try to make sure all cops act with 100% integrity.  Campisi writes compellingly of his nearly twenty years as the chief of IAB, monitoring his fellow cops in what was often a thankless job. It was a job that often included lonely stakeouts, highly dangerous situations and savvy detective work, worthy of Sherlock Holmes. The NYPD lost the best internal investigator in the country when Campisi left the department."
—Ray Kelly, Longest serving Commissioner of the NYPD

“In the world of policing there is no more secretive activity then Internal Affairs. In Blue on Blue, Chief Charlie Campisi lifts the veil, showing the reader the twisted rationalizations, clever deceptions, and sometimes dangerous calculations of cops who are criminals. As the longest serving chief of the NYPD bureau entrusted with the job of rooting out cops who betray their oath, Campisi proved perfect for the job. Though he always treated the accused as innocent until facts suggested otherwise, when evidence showed wrongdoing, he was both skillful and relentless in bringing the offender to justice. I appointed Chief Campisi for those very reasons, and consider him the best ever Chief of IAB in the best police department in the world.”
—Howard Safir, 39th Commissioner of the NYPD

“As a former police chief, I can vouch not only for the impressiveness of the detective work on display in Blue on Blue, but also for the unyieldingly truthful picture the book paints of how real cops do their jobs every day. Anyone who isn’t a cop will find this book eye-opening, and everyone will find it riveting.”
—Gil Kerlikowske, former Police Chief of Seattle, Washington