The Disaster Artist: My Life Inside The Room, the Greatest Bad Movie Ever Made (Paperback) 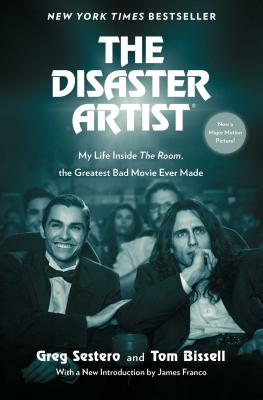 From the actor who somehow lived through it all, a “sharply detailed…funny book about a cinematic comedy of errors” (The New York Times): the making of the cult film phenomenon The Room.

In 2003, an independent film called The Room—starring and written, produced, and directed by a mysteriously wealthy social misfit named Tommy Wiseau—made its disastrous debut in Los Angeles. Described by one reviewer as “like getting stabbed in the head,” the $6 million film earned a grand total of $1,800 at the box office and closed after two weeks. Years later, it’s an international cult phenomenon, whose legions of fans attend screenings featuring costumes, audience rituals, merchandising, and thousands of plastic spoons.

Hailed by The Huffington Post as “possibly the most important piece of literature ever printed,” The Disaster Artist is the hilarious, behind-the-scenes story of a deliciously awful cinematic phenomenon as well as the story of an odd and inspiring Hollywood friendship. Actor Greg Sestero, Tommy’s costar and longtime best friend, recounts the film’s bizarre journey to infamy, unraveling mysteries for fans (like, who is Steven? And what’s with that hospital on Guerrero Street?)—as well as the most important question: how the hell did a movie this awful ever get made? But more than just a riotously funny story about cinematic hubris, “The Disaster Artist is one of the most honest books about friendship I’ve read in years” (Los Angeles Times).

Greg Sestero is a French-American actor, producer, and writer. He costarred in the cult phenomenon The Room.

Tom Bissell is the author of several books and a winner of the Rome Prize and a Guggenheim Fellowship. He writes frequently for Harper’s and The New Yorker.

"Hilarious . . . the stories behind the making of The Room are even more bizarre than one might expect; truly, like the film itself, they must be seen to be believed.”
— The Paris Review

“Possibly the most important piece of literature ever printed.”
— The Huffington Post

"Like disaster porn...memorable for being actually inspiring, to my surprise."
— TheWire.com