Singing Like Germans: Black Musicians in the Land of Bach, Beethoven, and Brahms (Hardcover) 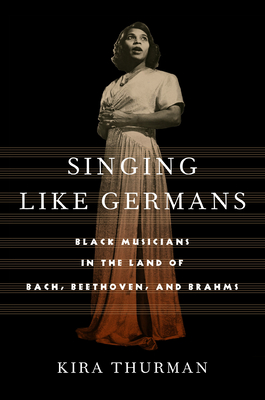 In Singing Like Germans, Kira Thurman tells the sweeping story of Black musicians in German-speaking Europe over more than a century. Thurman brings to life the incredible musical interactions and transnational collaborations among people of African descent and white Germans and Austrians. Through this compelling history, she explores how people reinforced or challenged racial identities in the concert hall.

Throughout the nineteenth and twentieth centuries, audiences assumed the categories of Blackness and Germanness were mutually exclusive. Yet on attending a performance of German music by a Black musician, many listeners were surprised to discover that German identity is not a biological marker but something that could be learned, performed, and mastered. While Germans and Austrians located their national identity in music, championing composers such as Bach, Beethoven, and Brahms as national heroes, the performance of their works by Black musicians complicated the public's understanding of who had the right to play them. Audiences wavered between seeing these musicians as the rightful heirs of Austro-German musical culture and dangerous outsiders to it.

Thurman explores the tension between the supposedly transcendental powers of classical music and the global conversations that developed about who could perform it. An interdisciplinary and transatlantic history, Singing Like Germans suggests that listening to music is not a passive experience, but an active process where racial and gendered categories are constantly made and unmade.

Kira Thurman is Associate Professor of History, German Studies, and Musicology at the University of Michigan. A classically trained pianist who grew up in Vienna, Austria, she is also a founder of the website blackcentraleurope.com.