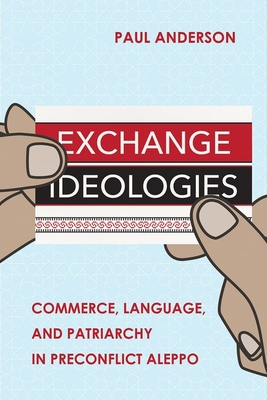 By Paul Anderson
This item is not available.

Exchange Ideologies documents the social world of Aleppo's traders before the destruction of the city, exploring changing conceptions of commerce in Syria. Syria's traders have been seen as embodying a timeless culture of the bazaar, or an ahistorical Islamic culture of trade. Other accounts portray them as venal figures, motivated only by profit, and commerce as a purely instrumental pursuit. Rejecting both approaches, Paul Anderson traces the diverse social structures, and notions of language, through which Aleppo's merchants understood and construed commerce and the figure of the merchant during a period of economic liberalization in the 2000s. Rather than seeing these social structures and representations as expressions of a timeless bazaar culture, or as shaped only by Islamic tradition, Exchange Ideologies relates them to processes of politically managed economic liberalization and the Syrian regime's attempts to ensure its own survival in the midst of change. In doing so, Anderson provides an account of economic liberalization in Syria as a social and cultural process as much as a political and economic one.