The Age of Reason: Being an Investigation of True and Fabulous Theology (Paperback) 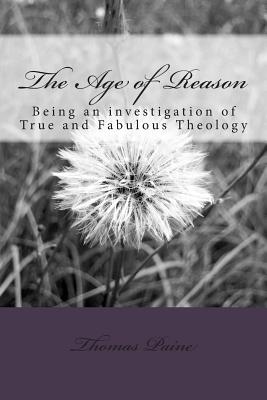 This book contains the complete AGE OF REASON by Thomas Paine including an introduction to Origins of Freemasonry and the much censored criticism of Christianity.About his own religious beliefs, Paine wrote in The Age of Reason: I believe in one God, and no more; and I hope for happiness beyond this life. I do not believe in the creed professed by the Jewish church, by the Roman church, by the Greek church, by the Turkish church, by the Protestant church, nor by any church that I know of. My own mind is my own church. All national institutions of churches, whether Jewish, Christian or Turkish, appear to me no other than human inventions, set up to terrify and enslave mankind, and monopolize power and profit.Thomas Paine (February 9, 1737 O.S. January 29, 1736] - June 8, 1809) was an American and English political activist, philosopher, political theorist and revolutionary. As the author of the two most influential pamphlets at the start of the American Revolution, he inspired the Patriots in 1776 to declare independence from Britain. His ideas reflected Enlightenment-era rhetoric of transnational human rights. He has been called "a corsetmaker by trade, a journalist by profession, and a propagandist by inclination."In December 1793, he was arrested and imprisoned in Paris, then released in 1794. He became notorious because of his pamphlet The Age of Reason (1793-94), in which he advocated deism, promoted reason and free thought, and argued against institutionalized religion in general and Christian doctrine in particular. He also wrote the pamphlet Agrarian Justice (1795), discussing the origins of property, and introduced the concept of a guaranteed minimum income. In 1802, he returned to the U.S. where he died on June 8, 1809. Only six people attended his funeral as he had been ostracized for his ridicule of Christianity.