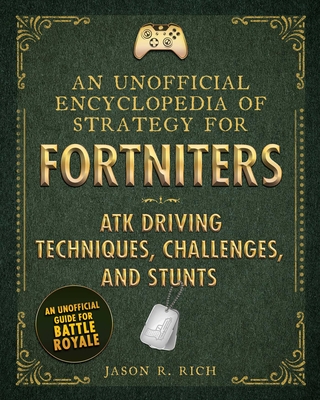 The ultimate reference for Fortnite ATK, driving, and much more. Now you can win!

Here is a comprehensive full-color driving manual, teaching you how to find and effectively drive or ride an ATK during a match. From basic driving techniques and exploration of the island to advanced ways to utilize an ATK offensively and defensively during any match, this guide runs the gamut of ATK optimization.

With this book, any boy or girl can learn all about Fortnite Battle Royale and how to survive in a wide range of situations, using the weapons, ammo, loot items, and resources available to them. Master the terrain and use it to your tactical advantage during high-intensity firefights and all-out battles!

No children determined to be a Fortnite expert should be without this book.

Jason R. Rich (www.JasonRich.com) is an avid gamer and the author of more than two dozen full-length computer and video game strategy guides. He’s also contributed thousands of game reviews and articles to national magazines and websites, and has worked as a consultant to some of the world’s biggest computer and video game developers and publishers. Follow him on Twitter/Instagram (@JasonRich7).

"2018's first real gaming phenomenon. It's kind of extraordinary to watch. . . . It's not hard to see why gamers everywhere (and of all ages) are more than a little obsessed with it."
?Forbes

"Quickly exploded, conquering the Battle Royale genre . . . Nothing quite sums up 2018 on the internet quite like Fortnite. It’s highly addictive."
?Newsweek

"The biggest game on the internet."
?CNBC

"Everyone is playing it."
?Chicago Tribune

"The biggest game in the world . . . The top of teenagers' most wanted games list."
?Guardian

"The video game taking over the world."
?Quartz

"Already racked up a staggering 40 million players since it debuted in the fall, with 10 million joining in the first two weeks."
?New York Post

"The game's rise thanks to its Battle Royale mode is exceptional."
?Game Informer

"Fortnite Battle Royale is on top of the world. Not only is Epic's battle royale game the most-watched game on Twitch, but it displaced 2017's big ticket game PlayerUnknown's Battlegrounds, a game that spent the better part of last year dominating the video game industry."
?USgamer

"No signs of the game slowing down."
?Metro

"For a new game mode to be so rapidly developed while differing so much from the game's original vision, and to overshadow the original mode to this degree, is unprecedented."
?PC Gamer