The Super Cool Science of Harry Potter: The Spell-Binding Science Behind the Magic, Creatures, Witches, and Wizards of the Potter Universe! (Paperback) 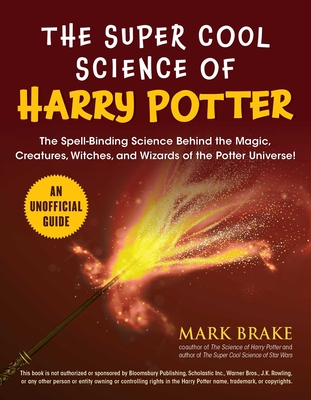 Movie-goers and young readers the world over have been spellbound by the tales of “the boy who lived.” J. K. Rowling’s stories have conjured ideas of magic and sorcery into our minds like no other book series before. But nature is its own magic. And Muggle scientists have uncovered answers for the weird and wonderful questions from the magic world. Questions such as:

The Super Cool Science of Harry Potter is for any young fan of Harry Potter. You don’t need to be a witch or wizard to weave your magical way through the facts about your favorite characters, potions, spells, and mysteries from the boy wizard’s world!

Mark Brake developed the world’s first science and science fiction degree in 1999. He also launched the world’s first astrobiology degree in 2005. He’s communicated science through film, television, print, and radio on five continents, including for NASA, Seattle’s Science Fiction Museum, the BBC, the Royal Institution, and Sky Movies. He was one of the founding members of NASA’s Astrobiology Institute Science Communication Group. He has written more than a dozen books, including Alien Life Imagined for Cambridge University Press in 2012. Mark also tours Europe with Science of Doctor Who, Science of Star Wars, and Science of Superheroes road shows.