Alexander Hamilton and the Battle of Yorktown, October 1781: The Winning of American Independence (Hardcover) 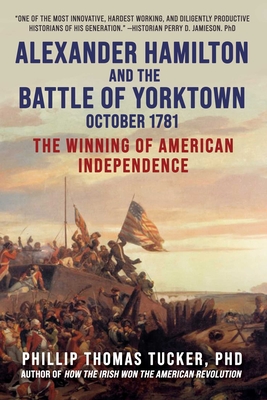 Discover the little-known role Alexander Hamilton played in the decisive battle of the American Revolution: Yorktown.

Alexander Hamilton and the Battle of Yorktown, October 1781 is the first book in nearly two and a half centuries that has ever been devoted to the story of Alexander Hamilton’s key contributions in winning the most decisive victory the of the American Revolutionary war at Yorktown. Past biographies of Hamilton, including the most respected ones, have minimized the overall importance of the young lieutenant colonel’s role and battlefield performance at Yorktown, which was key to forcing the surrender of Lord Cornwallis’s army.

Hamilton led the assault on strategic Redoubt Number Ten, located on the left flank of the British defensive line, and captured the defensive bastion—an accomplishment that ensured the defeat and surrender of Cornwallis’s army that won the American Revolution and changed the course of world history.

You thought you knew the full story of the founding father of the American financial system from Lin Manual Miranda's Broadway smash hit Hamilton, but Alexander Hamilton and the Battle of Yorktown, October 1781 brings into sharp relief the vital role he played in the most important battle of the American Revolution, as told by renowned historian Phillip Thomas Ticker, PhD.

Phillip Thomas Tucker, PhD, is a writer and historian who has edited and authored more than sixty-five books. After earning his PhD in 1990 from St. Louis University in St. Louis, Missouri, he took a position as civilian historian with the Department of Defense and specialized in air force history. His previous books include Kings Mountain, Pickett's Charge, How the Irish Won the American Revolution, George Washington’s Surprise Attack, Exodus from the Alamo, and Father of the Tuskegee Airmen, John C. Robinson. He lives in Central Florida.