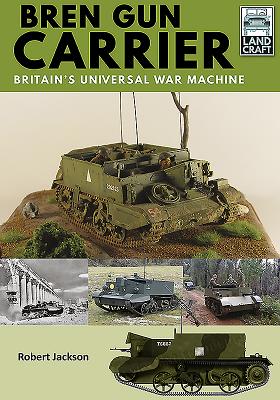 One of the most versatile fighting vehicles in the British army and many other forces for a quarter of a century, the Universal Carrier - more popularly known by its original title of Bren Gun Carrier - was developed as a fast and agile infantry-support vehicle. In this volume in Pen & Sword's LandCraft series, Robert Jackson traces its design and manufacturing history and describes its operational role throughout its long career.

The Bren Carrier served in every theater of the Second World War, from northwest Europe, North Africa and the Soviet Union to the Far East. Then, with the war over, it was operated by many belligerents in a string of other conflicts around the world, including Israel's struggle for independence and the war in Korea.

A selection of archive photographs showing the Bren Carrier in action gives a graphic impression of how adaptable it was and records the variety of equipment it could carry. The book is an excellent source for the modeler, providing details of available kits together with specially commissioned color profiles which illustrate how the Bren Carriers used by different units and armies appeared.