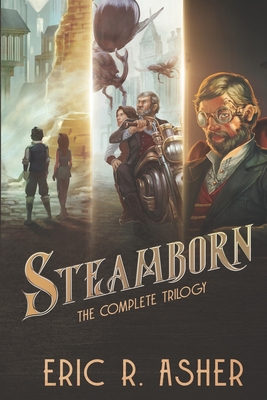 This collected edition includes Steamborn, Steamforged, and Steamsworn in one omnibus trade paperback

STEAMBORN (Book 1)
A supernatural swarm. A treacherous scheme. A tinker's apprentice may be the village's only hope...

Jacob has yet to meet a gadget he couldn't fix or an adventure he could resist. With trade routes to his remote Lowlands town cut off, Jacob must exchange his boyhood adventures for petty theft. After all, his wages at the tinker shop aren't enough to pay for his father's medicine.

But it soon becomes clear why few merchants brave the nearby roads as a plague of terrifying creatures descends upon the town. With the Lowlands under siege, Jacob and his friend have no choice but to run for their lives. When their escape uncovers a terrible secret, Jacob learns there are those who'll stop at nothing to make sure the teen takes the scandal to his grave...

STEAMFORGED (Book 2)
There are old wounds in the forgotten places of the world, and some are soaked with blood.

Jacob and his friends fled into the Deadlands after the fall of Ancora. With the city now under the Butcher's control, they're going to need help if they ever hope to return home. Venturing to the desert city of Bollwerk, they seek an old ally who may hold answers that could prevent a war.

But the path to Bollwerk is rife with danger. Sky needles. Fire lizards. Around each arid bend lies a new threat. Their enemies are many. Their chances... few. If they don't find Archibald, ruler of Bollwerk, and convince him to join their cause, however, their very lives could be claimed by the desolate wasteland that calls to their souls.

STEAMSWORN (Book 3)
The world died, only to be reborn in war. It was the way of things, but change comes with the wind...

Flanked by Bollwerk's forces, Jacob and his friends march to the front lines of Dauschen, their sister city. There they find the armies of Fel cutting off the path to Ancora, and slaughtering any sympathizers.

Jacob learned how deadly the desert could be, yet even that pales under the cloud of the coming battle. While Jacob journeys to Dauschen, Alice stays behind to focus on her training. They defeated one Deadlands warlord, but she knows they have to be ready for what's coming.

Forged in the Deadlands crucible, and armed with the knowledge of their true enemy, Jacob, Alice, and their allies bring the fight back to Ancora. Blood will be spilled. Lives will be lost. In the darkest hour, vengeance will light their path to a new era of hope.

Eric is a former bookseller, guitarist, and comic seller currently living in Saint Louis, Missouri. A lifelong enthusiast of books, music, toys, and games, he discovered a love for the written word after being dragged to the library by his parents at a young age. When he is not writing, you can usually find him reading, gaming, or buried beneath a small avalanche of Transformers.