Breaking the Ice: The True Story of the First Woman to Play in the National Hockey League (Hardcover) 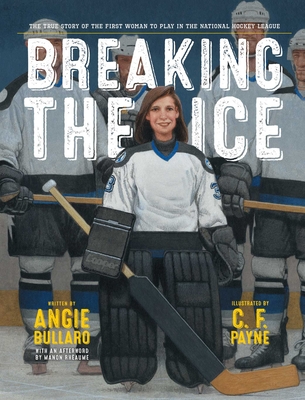 The inspiring true story of Manon Rhéaume, the first and only woman to play a game in the National Hockey League, featuring an afterward from Manon herself.

“One day, a woman will play in the National Hockey League. If no one prevents her,” said a twelve-year-old Manon Rhéaume. Manon always dreamed of playing hockey. So, when the team her father coached needed a goalie, five-year-old Manon begged for the chance to play. She didn’t care that she’d be the only girl in the entire league or that hockey was considered a “boys’ sport” in her hometown of Lac-Beauport, Quebec, Canada. All she cared about was the game. After her father gave her that first chance to play, she embarked on a spectacular, groundbreaking career in hockey.

At every level of competition, Manon was faced with naysayers, but she continued to play, earning her place on prestigious teams and ultimately becoming the first woman to play a game in the NHL. Including an afterword written by Manon herself, Breaking the Ice is the true story of one girl’s courage, determination, and love for the sport.

Angie Bullaro makes her authorial debut with Breaking the Ice. She has been playing sports for about as long as she has been able to walk. She has always loved sports stories about underdogs and feels privileged to tell such an important story. She is now a (somewhat) proficient ice hockey goalie and an avid hockey fan. Angie lives in New York City with her husband, Mike Musco. Along with writing, she is also an actress and film producer. You can learn more about her at AngieBullaro.com.

C. F. Payne has illustrated more than a dozen picture books, including the New York Times bestselling Mousetronaut by astronaut Mark Kelly; the Texas Bluebonnet winner Shoeless Joe & Black Betsy, written by Phil Bildner; and the New York Times bestsellers The Remarkable Farkle McBride and Micawber, both by John Lithgow. He teaches at the Columbus College of Art & Design, where he is the chair of the Illustration Department. Payne lives with his wife and children in Cincinnati, Ohio. Visit him online at CFPayne.com.

Bullaro keeps the pace in this highlight reel of a biography. Payne’s illustrations...truly capture the velocity and scale of hockey and Manon’s unique position in it. An eminently enjoyable biography, not just for hockey fans, but for all who love stories of pioneering women.
— Kirkus Reviews

Written in third person from Manon’s viewpoint, the story unfolds with moments of drama and success, underpinned by her determination. Payne’s expressive large-scale illustrations, created with acrylics and colored pencils, portray even minor characters as individuals. In an excellent appended note, Rhéaume reflects on her experiences, applauds the success of women’s hockey, and muses “it’s crazy” that she remains the only woman to have played a game in any of the four major North American sports leagues.

This straightforward, inspirational biography emphasizes Rhéaume’s grit (“She played with bruised arms and pulled muscles”) and the sexism she faced (“coaches still cut her from the best teams simply because she was a girl”). Payne’s intensely detailed illustrations realistically capture the dull sheen of goalie pads and the thwack of slap shots as Rhéaume plays her way to the pros. Includes an afterword by Rhéaume, a timeline, and “fun facts.”