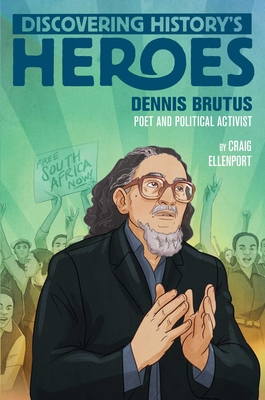 Jeter Publishing presents a middle grade series that celebrates men and women who altered the course of history but may not be as well-known as their counterparts. In this biography, meet South African poet and human rights activist Dennis Brutus.

Dennis Brutus was a poet and human rights activist whose works centered on his sufferings and those of his fellow blacks in South Africa.

For fourteen years, Dennis taught English and Afrikaans in South Africa. As the white minority government increased restrictions on the black population, he became involved in a series of anti-apartheid related activities, including efforts to end discrimination in sports. The government subsequently banned him from teaching, writing, publishing, attending social or political meetings, and pursuing his studies.

In 1963, his refusal to abide by the ban resulted in eighteen months of hard labor on Robben Island, alongside Nelson Mandela. Forbidden to write or publish after his release, Brutus left South Africa in 1966 for England and then the United States, and is now recognized as one of the prominent voices in the anti-apartheid movement.

Craig Ellenport is a veteran writer and editor based in New York. A former senior editor at NFL.com, Ellenport has written about football, baseball, basketball, hockey, and tennis. He has written and edited more than a dozen sports books.